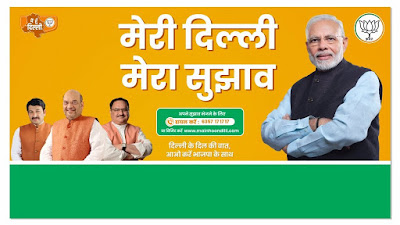 All preparations for the launch of the campaign named “My Delhi – My Suggestion”  were completed but the BJP postponed its biggest program today after a fire broke out at the factory in Piragadhi Udyog Nagar at around 4.30 am on Thursday.

The Bharatiya Janata Party (BJP) had decided to start the ‘Meri Delhi-Mera Saagna’ campaign from Thursday in view of the Delhi Assembly elections. Under this campaign, the BJP will go to the public to take suggestions for making Delhi better and on the basis of this the manifesto of the party will be issued. One fireman also

This campaign was scheduled to begin today. BJP state president Manoj Tiwari gave this information to the media. He said that the incident of fire is unfortunate, so it has been decided to postpone the program which starts today. He personally visited the factory

Now the program will be held tomorrow at 1 Pm at 14 Pandit Pant Marg. This program was postponed today due to fire at Peeragarhi.