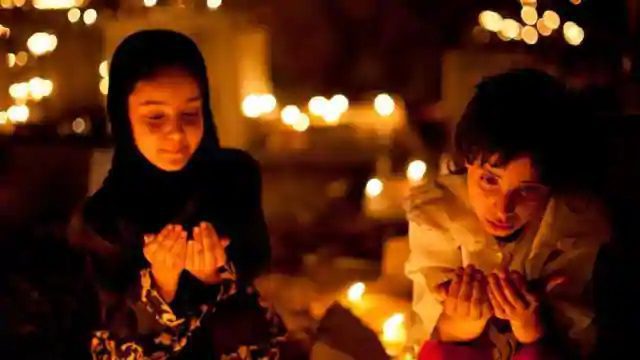 In Shab-e-Baaraat, Shab means night and Baaraat means Bari (free). In the Muslim community, this night is called Fajilat (glory). People of all Muslim communities worship Allah on this night. They pray to Allah and to this day they apologize for the wrong things they have done. It is known as Lailatul Barah or Lailatun Nisfe Mein Shaaban in Arabia. Whereas, in India, Pakistan, Bangladesh, Iran, Afghanistan and Nepal it is known as Shab-e-Barat. 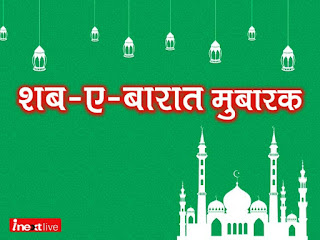 According to Islamic beliefs, on this night, if a prayer is offered with a sincere heart avoid from the sins, then Allah pacifies from every crime.Every crime of those who keep Shab-e-Barat in the day and worship at night are forgiven. This night has also been described as old age, Rahmat and Barkat.
According to the Islamic calendar, this night comes once in a year, in the month of Shaban start after sunset on the 14th. Shab-e-Baaraat (Ibadat, Tilawat and Shakahvat), which is commonly referred to as charity, is performed by all Muslims in large numbers. On this night decorations are done in mosques and cemeteries. On the night of Shab-e-Barat, a large crowd gathers in the cemeteries.
But Ibadat is an Urdu/Hindi word, which means Prayer to God. Tilavat means Charity to poor or needy ones.
Sakhavat drived from the Sanskrit/Hindi word “Shakha” which means friend. Here “shakavat” means “cooperation” in groups for a good purpose.
It is also believed about Shab-e-Barat that this night is to prepare an account of the deeds done in last year and decide the fate of the coming year.
There is a tradition of Shab-e-Barat spending the whole night in prayer. This night is spent in offering namaz, tilawat-e-qur’an, cemetery of cemeteries and charity according to one’s capacity. Many types of delicious desserts are made in Malwa-Nimar. Here Shab-e-Barat is celebrated by reading Fateha.
According to belief, Shab-e-Baaraat is supposed to prepare itself for the fasting for Ramadan.
People of Muslim religion celebrate this festival with great enthusiasm. Many types of dishes like halwa, biryani, korma etc. are prepared in homes. After worship it is served among the poor. In Shab-e-Barat, special decoration is done in mosques and cemeteries.  People who believe in Islam go to the graveyard tonight and pray for the salvation of the departed ancestors from the world.
In Islam it is considered one of the four Mukaddas nights, with the first being the night of Ashura, the second Shab-e-Meraj, the third Shab-e-Barat and the fourth Shab-e-Kadra. In Islam, five nights are considered more important than all nights. Among these are the night of Eid, the night of Bakrid, the night of Meraj, Shabe Kadr in Ramadan and the fifth night Shab-e-Baaraat. God surely accepts all the proper prayers done on this night; On this whole night people are blessed by God. That is why people of the Muslim community stay awake all night and read Namaz and Quran.