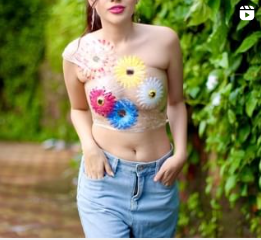 Beauty Desk, Delhi Magazine: Urfi Javed has shared a video today on her Instagram. You will not be able to believe your eyes seeing what she is wearing in this video. After blade, glass, jute, Urfi Javed is now seen wrapped in a transparent foil instead of bra.  She is looking very cute and hot in it. She also put a blue jeans trouser that match her looks very well. After seeing this, the fans of Urfi Javed are going crazy about her and the fans are also very fond of her jugaad! 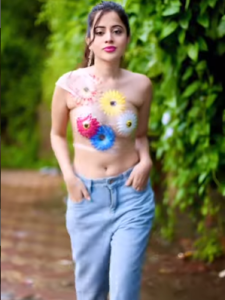 More than 50k fans liked her video and praised it with

On front side, there are 5 beautiful flowers, and back side is bare back. Urfi Javed looks very gorgeous in this look.

At the same time, she has also styled the hair in a beautiful way. Urfi completed her look with a pink colored lipstick.

Urfi Javed had earlier shared a video. You cannot even imagine the experiment Urfi did with clothes in this video. Urfi made a sizzling dress for herself with Blade. At the same time, it was surprising that in this dress there were blades from top to bottom.

But you might have forgotten that Urfi Javed is such an artist who makes her dress ready even with torn clothes.

Earlier, internet sensation Urfi Javed shared the post on Instagram story and said that he is the target of sharp shooter. Urfi wrote in the post- ‘Obed Afridi and his girlfriend have called me through a sharp shooter. I am getting threats that I should delete the post. I have given evidence to the police.