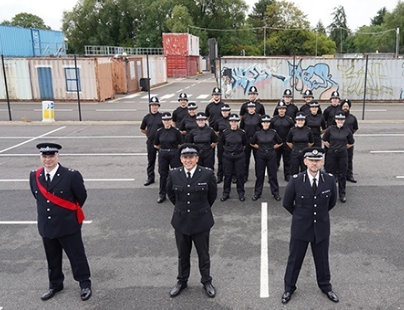 UK Desk, Delhi -Magazine: There is tension in the UK city of Leicester after clashes between the people of Hindu and Muslim communities. It started after Pakistan’s defeat in the Asia Cup match played against India in Dubai on 28 August. The atmosphere worsened after clashes between the two communities in the eastern area of ​​the city two days ago.

27 people have been arrested

Along with appealing for peace, the police is running an operation against the miscreants. So far 27  people have been arrested. People from both the communities have accused each other of attacking and taking out rallies. Most of the demonstrations have taken place on Belgrave Road. There are many restaurants in this area of ​​people of Indian and Pakistani origin. 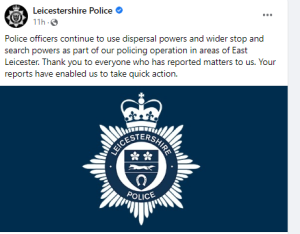 The police were given the right to interrogate anyone

The police issued a dispersal order till 6 am on Monday. Under this, anyone can be stopped and interrogated. People below the age of 16 have been asked to stay at home.

Violence broke out on Melton Road in Belgrave area of ​​the city even after the match on 28 August. In this case, the police had arrested 8 people. Even after this the clashes continued. Then the police arrested 19 more people. According to Acting Chief Constable Rob Nixon, the police operation will continue.

Without permission, stones and glass bottles were thrown by Muslim Community

On Sunday, the police closed Belgrave Road in the city after demonstrations without permission. A large number of police are stationed here. According to media reports, there have been clashes between the two groups several times on Saturday night. Stones and glass bottles were thrown at each other from both the sides. Cars were vandalized and beaten up at various places. After this violence, community leaders have appealed for peace.

Attacks on temples and flags were torn

People from the Hindu community have made allegations of attacking temples and tearing flags. It is alleged that Namaz is being offered on the road in an area populated by Hindus.

Sanjeev Patel, who represents temples of Hindu and Jain communities in Leicester city, said what happened on Saturday night was very disturbing. Talking to BBC, Patel said that we have been living peacefully in this city for many decades. The events of the last few weeks have made it clear that there are many things that need to be discussed.

Some Hindu groups claim that some groups are coming to Leicester from Birmingham, a city with a large Muslim population. Earlier this month also there were attacks by people of Pakistani origin. Tension had been rising here since the defeat of Pakistan on 28 August.

Violence broke out on Saturday after the Muslim community said that after a week of peace, people of the Hindu community had appealed for a demonstration.

The MP said – everyone should return home, families are worried about you

MP Claudia Webb has appealed for peace on social media. He said – this is the time to keep the mind cool. I request everyone to return home. We can initiate conversations to strengthen community relationships. Your family will care about you. Police is trying to reduce tension, follow his advice.

Suleman Nagdi, associated with the Federation of Muslim Organizations, has said that what is happening on the streets is worrying. Crowds have been gathering during the India-Pakistan cricket match, but never before has the atmosphere been so bad. There are some Muslim disgruntled youth, who are spoiling the atmosphere.

Appeal to demonstrate peacefully after violence

After the violent clashes, an appeal is being made for peaceful demonstrations. Posters have been released for this on social media. On Sunday also, different groups demonstrated. There is no news of any clash during this period.

After Saturday’s violence, the police have registered several FIRs. Police have said that talks were also made to make peace, but there have been incidents of violence in the city.

Footage from second night of attacks against the Hindu community by mobs in Leicester, Tuesday 6th September 2022.