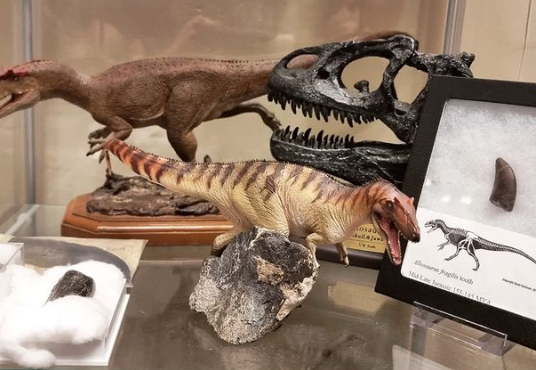 Miscellaneous Desk, Delhi Magazine: A dinosaur with 500 teeth and a translucent skull

The unusual dentition of Nigersaurus is just one of its many peculiarities. This dinosaur was about 15 m long and weighed 4 tons. But unlike other herbivorous dinosaur specimens that could grab foliage from the tops of trees, the Nigersaurus was doomed to graze grass on the ground. Indeed, according to the study of his spine, he was unable to raise his head above his back! His vertebrae were also extremely thin, even having many hollow spaces similar to those seen in birds. A finesse that is found in the bones of his skull which were of a very low density. A light beam can indeed easily pass through. An extreme fragility which explains why it was difficult to find intact fossils. 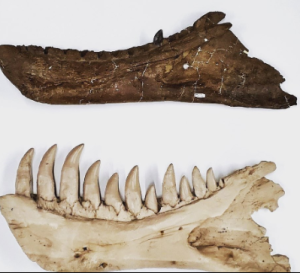 Size of the 500 Teeth Dinosaur

Comparable in size to a modern African elephant, Nigersaurus was a medium-sized quadrupedal herbivorous dinosaur. His body was  9 meters long and his femur was 1 meter. Paleontologists estimate it weighed around 4 tons as an adult. 🦕

It was characterized by a small head, a relatively short neck, wide hind legs and a long tail. Its skull was designed for easy feeding and its bones were thin. 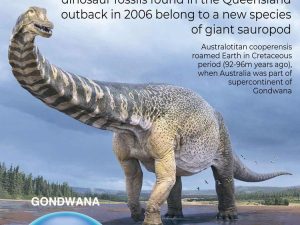 Nigersaurus had a wide , “suction slit” shaped mouth. It contained more than 500 teeth, which were replaced approximately every 14 days. The skin of this dinosaur was brown and its belly was lighter in color.

The structure of the inner ear of Nigersaurus indicates that its head was usually carried close to the ground. These characteristics could be an adaptation to the soft plants that grew during the early Cretaceous, as the continents continued to break up and the climate became wetter, compared to the drier conditions of the Late Jurassic. Its diet consisted mainly of ferns and horsetails. 🌿

Previously, such batteries of teeth were known only in hadrosaurs and ceratopsians. The discovery of Nigersaurus showed that at least one lineage of sauropods, the rebbachisaurids, also had them.

Where Did the Nigersaurus Live?

Nigersaurus means ” Niger lizard “. It lived in the early Cretaceous on the plains of Niger, alongside the ornithopod Ouranosaurus, the spinosaurid Suchomimus, and the massive crocodile Sarcosuchus. Bones have also been found in Algeria and Tunisia. 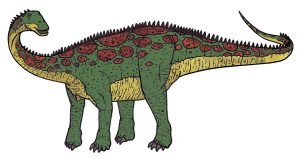 This dinosaur was discovered in Niger in 1976, in the Elrhaz formation, but it had not been described. It was not until 1999 and the discovery of new remains that knowledge about Nigersaurus was published. The first remains were discovered by the famous French paleontologist Philippe Taquet. Nigersaurus taqueti is the only species of the genus, named after the scientist. This paleontology enthusiast later became director of the national museum of natural history.

Behavior of the Dinosaur with 500 Teeth

Nigersaurus was a social sauropod that could live with a variety of other dinosaurs. Among these we find other large herbivorous dinosaurs, large theropods (carnivorous dinosaurs) and crocodylomorphs. Given its size, it is not excluded that it had predators. 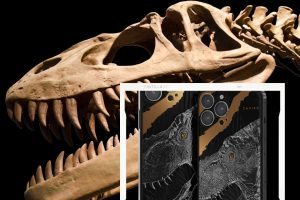 He is nicknamed the “dinosaur-cow”.

Paleontologist Paul Sereno, discoverer with his team of 80% of the skeleton of Nigersaurus taqueti, had confided in 2007 to the antenna of the NPR, the main American public radio, that this dinosaur was the strangest he had ever seen.

The Nigersaurus was a herbivore and therefore fed on multiple plants. This dinosaur chewed its food with hundreds of small , sharp teeth located at the front of its jaws. 🦷 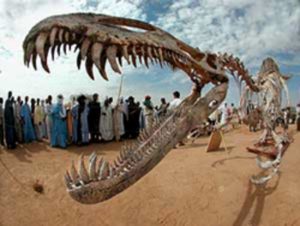 This would have allowed the 500-toothed dinosaur to feed on low-growing vegetation and easily crush them, earning it the nickname ” Mesozoic lawnmower “.

Classification of the Dinosaur with 500 Teeth

Nigersaurus is a member of the Rebbachisauridae family , an evolutionary offshoot of Diplodocimorpha.

Knowledge about this dinosaur was poorly developed following its discovery in 1976, although it is a common genus. They progressed significantly following the discoveries of new remains made in 1997 and 2000 by Paul Sereno. This American paleontologist is famous for his discovery of “SuperCroc”, an almost complete fossil of Sarcosuchus. 🐊 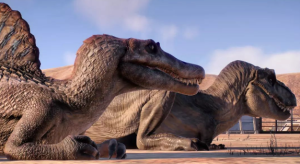 The reason for this delay in understanding the genus Nigersaurus stems from the state of its remains. The structure of the dinosaur consists of many voids and it is extremely fragile . Using a powerful beam of light, it is even possible to see light through a fossil skull. This fragility has complicated the work of paleontologists, who have not been able to find intact neither articulated skeletons nor skulls. In the rebbachisaurid family, these specimens are the most complete known.

Paleontologists have discovered the first duck-billed dinosaur in Africa

In 2020, for the first time in Africa, an international research team has revealed the presence of a new species of duck-billed dinosaur in the phosphate deposits of Morocco dating from the end of the Cretaceous, 66 million years ago.On the move: researchers from the Paleontology Research Center – Paris (MNHN – CNRS – Sorbonne University) of the University of Bath, the University of the Basque Country and G. Washington University. They detail their findings in a study published in early November in the journal Cretaceous Research. 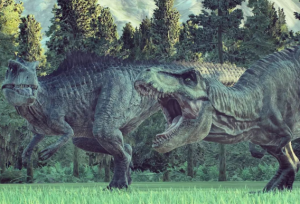 A dinosaur as long as a basketball court and as tall as a London bus. It is a real titan that scientists have highlighted in Australia. In a study published by the journal PeerJ , a team has just announced that it has discovered a new species of sauropod. And what species. 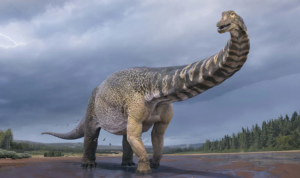 According to the analysis of its fossils, the animal could reach a height of 5 to 6.5 meters for a length of 25 to 30 meters. Colossal measurements that rank it directly among the largest dinosaurs ever identified and allow it to claim the title of the largest dinosaur revealed in Australia.

Dinosaurs are among the most extraordinary creatures to have walked the surface of our planet. If we know that the largest dinosaur was the Patagotitan mayorum , the fastest the Compsognathus, which was the dinosaur with the most teeth? 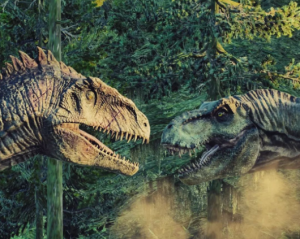 The sharp teeth of the tyrannosaur or the velociraptor, two terrible predators, have haunted many of our childhood nightmares! There is, however, a dinosaur whose jaw is even more impressive: that of the Nigersaurus taqueti. 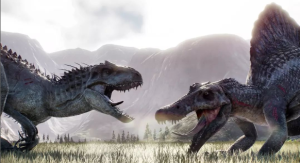 This sauropod dinosaur (herbivorous and quadrupedal) lived during the Lower Cretaceous, the oldest period of the Cretaceous from -145 million years to 100.5 million years ago, in what is now Niger . This extraordinary dinosaur had a peculiarity that was surprising to say the least: it had 500 teeth!

2 thoughts on “What Dinosaur Has 500 Teeth: Nigersaurus”