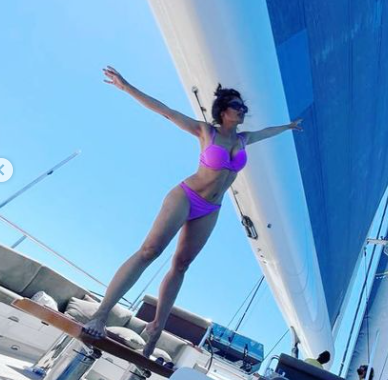 One of the most beautiful and evergreen Hollywood actress Salma Hayek showed how she is relaxing with her billionaire husband Frasnoy-Henri Pinault on a luxury yacht. The celebrity shared several photos from the boat trip on her Instagram.

The Mexican-American actress danced on a table in a lavender two-piece. And in one of the photos, Salma’s husband, the French billionaire Francois-Henri Pinault, whom she married in 2009, also appeared. The couple have a common daughter, Valentina.

Few days ago, Salma Hayek and her 14-year-old daughter Valentina posed for the May issue of Vogue Mexico, and graced the cover of the magazine.

Followers of the American celebrity bombarded her with approving comments about the beautiful appearance of the actress.

“Incredible”, “My role model”, “Fascinating”, – subscribers of Hayek comment on a series of photos from the yacht.

You would also love to read about beautiful and evergreen Hollywood Actresses.