Skip to content
Elavenil Valarivan another golden girl for India from Cuddalore, Tamilnadu (India), represented India at the ISSF World Cup and won a Gold Medal in 10 meters air rifle match on 28th August in Brazil. 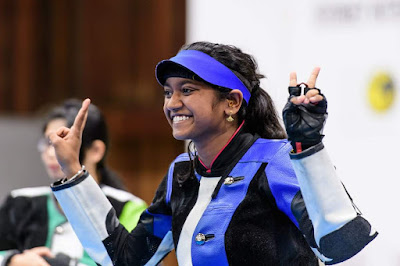 She was participating 1st time in senior category and won Gold Medal for our country. Earlier, in 2018 she have won silver in junior category in same ISSF championship.

Elavenil Valarivan scored 251.7 and won gold Medal for India. Valarivan is the third Indian player to win gold in the 10-meter air rifle event of ISSF World Cup after Chandela and Anjali Bhagwat. While this time  India’s two other shooters Anjum Mudgil and Apoorvi Chandela failed to win medals.


Actually she missed out on winning the medal in the World Cup held in Munich earlier this year. Valarivan had scored 208.3 points and had to settle for number four.

Elavenil is born in Cuddalore, but after two year her parents were shifted to Ahmedabad in Gujrat,
But people from Cuddalore and in Tamil Nadu are also celebrating her victory.