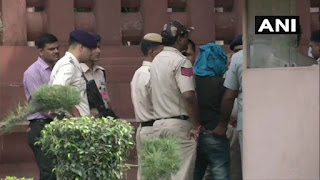 A Youth from Delhi named Sagar Insa  resident of Laxmi Nagar was detained due to entry with a knife in Indian Parliament. He disclosed that he is a follower of Ram Rahim.

According to the Parliamentary sources , Sagar, who lives in Laxmi Nagar area of Delhi, came to the Parliament complex by bike. After this, he stopped near Gate number one of the Parliament and started waving slogans and shouting slogans in support of  convicted saint Ram Rahim who is currently booked in Sunaria village jail near Rohtak city in Haryana, in a murder case and a rape case. During this time some people started making videos of him there.
The convicted held by Delhi Police and starting interrogation.