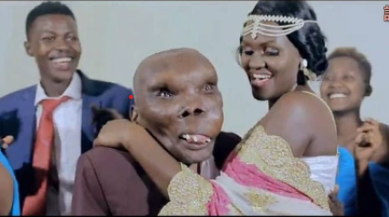 Inspirational Desk, Delhi- Magazine: Godfrey Baguma’s name “Sebaby” is well known in Africa. Even after being successful, his presence is unusual for people. In fact, Godfrey Baguma was born with a rare disease, due to which he had various deformities in his head and face. His mother had also abandoned him because of his strange appearance and his grandmother took care of him. Known as the ugliest man in the country, Godfrey is a successful singer and comedian today. Let us tell you how Godfrey became a successful singer and comedian in the face of challenges.

Who is Godfrey Baguma?

Godfrey Baguma’s birthplace is Kyanjana, Lwengo District and he is a professional cobbler. Baguma, 47, was always afraid to go out and socialize with people as they called him a strange creature. At the age of 10, he noticed an unusual swelling in his cheek. He had to face challenges in life because of his condition. Ssebabi suffers from a rare medical condition known as fibrodysplasia. Due to this, cells and tissues do not develop properly.

Mother had also left her because of her ugly appearance.
In an interview he said, “When I was born my mother looked at me and said that I am no normal child and she left me. Thankfully my grandmother took care of me. I wanted to go out and be with people. I was afraid to mix. People used to say that I am human because I looked like a strange creature. But now I have to accept what I look like.”

This is how the world’s ugliest man became
But then he decided to accept his reality. He then took part in a competition to find the ugliest person in the world and he won it. After that his life changed completely.

Today is Africa’s successful singer and comedy king
Golden opportunities are a once in a lifetime opportunity and Baguma did not fail to embrace his opportunities in life. He was able to take his local celebrity status and start his career in African pop music. He has released many songs which have grabbed the attention of his fans. Apart from singing songs, he also does stand-up comedy in many shows.

Married 3 times and father of 8 children
Interestingly, Godfrey has found love not once but three times and is also the father of 8 children. He had two children from his first wife, but she left Godfrey with the children several years earlier. After this he lived alone for a long time and then Kate Namanda came in his life. The two started living with each other and then she became pregnant. Godfrey was afraid that Kate might leave him too, so he himself asked him to leave the house. But, after 2 months she herself returned. After that both of them got married.

Godfrey has 6 children by his second wife. According to his wife Kate Namanda, her husband may not be the most handsome man in the world but he has a really good heart.