Hollywood Desk, Delhi Magazine: Kelly Brook is a UK based model, hollywood actress, TV personality and a successfull businesswoman. She has firmly established herself as more than just a pretty face in the minds of the English. She is presently associated with UK’s Heart Radio. She is also working as a brand ambessdor of F&F Clothing and SlimFast UK.

Kelly Brook , real name Kelly Ann Parsons, was born on 23 Nov, 1979 in Rochester, England. She grew up in Kent before moving to London to study at the Italia Conti drama school. She won her first beauty contest at 16 and then appeared in various commercials. Her father Kenneth is a scaffolder while her mother Sandra Kelly working as a cook.

She started her career as a model after winning a beauty pageant at the age of 16, for which she was entered by her mother. There were several campaigns for Reebok, Pepsi, Lynx, T-Mobile and Triumph, and it didn’t take long for the British press to take a keen interest in the sexist model.

Most Sexy lady on the Earth

It has been proved by scientists that this actress/model/TV moderator named Kelly Brook has the most perfect figure on the entire planet. According to a study from the University of Texas, Kelly Brook, has “the perfect body”.

As a teenager, Brook became a regular in the monthly men’s magazine market, appearing on the UK covers of GQ, Loaded and FHM, which named her one of the 100 sexiest women in the world; she was also considered by Grazia magazine as “the best female body” in the United Kingdom , She posed nude in 2010 for the cover of Playboy .

What is perfect figur size for a female for a sexy lady:

The specific ratio is 36-24- 36 inches (90 to 60 to 90 centimeters) have often been given as the “ ideal ” or “hourglass” ratios for women since at least the 1960s. New researches discovered that the commonly regarded perfect figure size of 36-24-36 is not really perfect.  The researches have discovered that the ideal figure size for women is 38-24-35 without a surgery. Kelly broke has the same figure size and she is the woman with perfect figure on the earth.

As well as working on fashion shoots, Brook soon became one of the UK’s best-known swimwear and lingerie models, work that culminated in the launch of her own line, which has been exclusively carried by New Look since 2006. Her posters and calendars have become best sellers, and Brook was one of the first models to control the exploitation rights to her image.

In addition to her modeling career, Brook has a rich television career, both in the United Kingdom and the United States. Her work as a presenter in the UK includes C4’s “Big Breakfast”, ITV’s “Love Island”, and Living Channel’s “Dirty Dancing: The Time Of Our Lives”; she has also worked as a presenter for MTV. In addition, Brook has had prominent roles in ITV’s “Miss Marple” (2006) and “Moving Wallpaper” (2009), as well as the successful Warner Bros series “Smallville” (2002), and the wildly popular “Strictly Come Dancing”, with Brendan Cole as a dance partner (2007).

Also, Brook has worked extensively in theater and film. Her first stage role was in Eye Contact, in 2000, at Riverside Studios. In 2008, Brook starred in Neil LaButte’s Fat Pig in London’s West End.

Her film career also began in 2000, with a supporting role in Puesto (Sorted). After a small appearance in 2003 in The Italian Job, he landed his first leading role in School of Seduction (2004), which earned him favorable reviews and brought him subsequent roles in films such as 9 strangers (House of 9, 2005), Three (2005 ) and Deuce Bigalow: European Gigolo (Deuce Bigalow: European Gigolo, 2005), along with Rob Schneider.

In addition to her work as a model, presenter, and actress, Brook has written a book, How to Pin Down The Pin-Up Whithin You (2007), launched her own perfume line, “Vivacious,” and released a fitness DVD. dance with the dancer Flavia Cacace, from Strictly Come Dancing.

British actress and fashion model Kelly Brook has always chosen fabulous people as her boyfriend – for seven years she was in a relationship with famous Bollywood actor Jason Statham.
And after their separation she found solace in the arms of Billy Zane, who bore a striking resemblance to Jason.
The lovers planned to get married and bought a mansion to equip the “family nest”, but in 2008, the star announced that their relationship was over.

After then she chose famous rugby player Tom Evans. In 2011, the girl shared the good news with her fans – she and Tom soon became parents. but, unfortunately, Brooke had a miscarriage. But soon they separated.

After that she was in a relationship with the former Marine and the star of the British reality show “Gladiators” – David Mackintosh. But this relationship doesn’t go long and they separated. 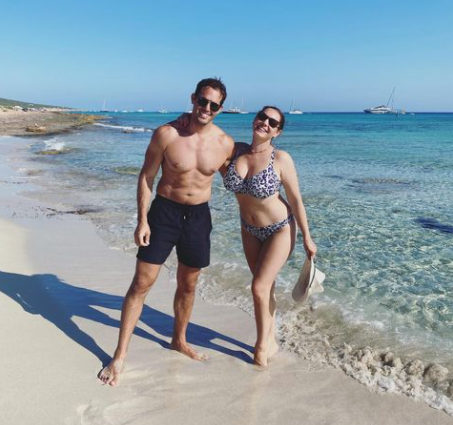 Currently she is in a relationship with Jeremy Parisi, an Italian model and actor who grew up in France. Both they live happily in London. Recently, the newly mint couple spent a romantic weekend in Italy and shared pics on instagram.

Famous for: Most Sexy Figure.