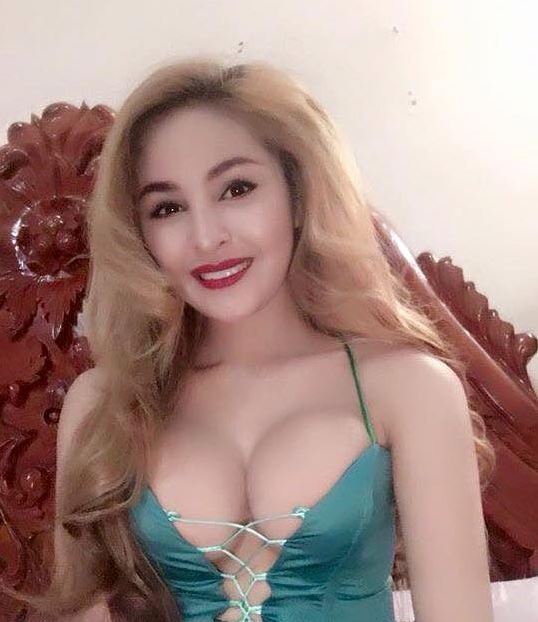 Multitude of professions and successful in all,  Denny Kwan is a Cambodian actress and a business women who has appeared in numerous movies. She also has a beautiful salon. In April 2017, Kwan was banned from appearing in any films for a year due to her exposed clothing style. Currently, she is living in Preah Vihear Province in Northern Cambodia.

Also, when Miss Danny Quan wore such a classic dress, the fans were surprised because every time they saw her show off her sexy breasts, and especially they asked her to wear a Gentle suit than a sexy suit because it looks very beautiful and dignified.

Day by day, actress Danny Quan’s makeup has remained sensuous despite the criticism, she still does not care. Just entering the new month, the actress revealed her bold  ‘avataar’ even more confidently in one of the recent Live video, where her fans were excited to see her breasts , nearly full.

On 17 January 2017, sexy star Miss Danny Quan and her siblings took a lot of gifts as well as money to distribute to poor families in a rural area in Trapeang Run village, DamnakReang commune, Udong district in Kampong Speu province.

Among them, there are many gifts such as rice, noodles, fish sauce, soy sauce, milk and canned fish to support the needy. Not only that, Ms. Danny Quan also promised that next week she and her siblings will be back again, bringing bicycles, clothes, school supplies, food and some money to give to the family.

Reality About the Ban on by The Government

the Ministry of Culture and Fine Arts is preparing to hold a meeting on April 25 to review On legal issues in the action to punish the actress who likes to show off her breasts, Denny Quan in While the star has continued to show aggression against the actions of the Ministry.

The Ministry of Culture and Fine Arts has decided to charge the actress with a fine for not being present at significant cultural meets,  including acting, filming and singing on television. This decision was made in the meeting on the morning of April 25, 2017, made in the presence of Mr. Sos Mach, President of the Khmer Artists Association, Mr. Heng Long, representatives of the Friends of the Voluntary Arts Association and many relevant officials.

They had also given a warning earlier in 2016,

On December 9, 2016, Thai Noraksatya, Secretary of State for the Ministry of Culture and Fine Arts, reiterated that they would take action against the actress again. “The second instruction may not be the same as the first, because again and again, the second instruction may be a formal guide,” he said. Give her (Danny Quan) a few more days to think about what she’s coming up with. Mr. Thai Noraksatya’s remarks at this time in the sense that he wants the actress Chay Deum Tru and sexy Danny Quan to soften their attitude, do not continue the activities that make the public criticize like this, especially it also affects the Cambodian society because the actor Danny Quan is a public figure.

Her response to the ban

But in this live video, there seems to be a lot of criticism and reaction on Danny Quan’s makeup because she exposed her breasts nearly full. Owing to this, many expressed dissatisfactions and used criticizing words to change her dress, and in particular, some said that if Danny Quan dressed appropriately, she will look better, beautiful and dignified.

The Ministry of Culture allowed Ms. Danny Quan to return to the arts:

She Shared a post about the ban removal on her Facebook page, “I, Danny Quan, would like to thank all the leaders of the Ministry of Culture and Fine Arts, as well as the President of the Arts Association for their decision. It is this unanimity that has given me the opportunity to get involved in the arts in all activities.

She has built a motel in Pali.

One thought on “Who is Denny Kwan and What is Reality of Ban on Her?”