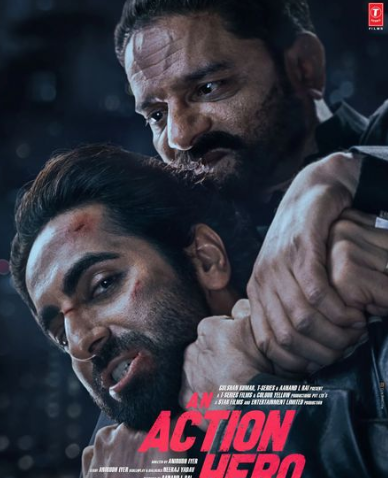 Bollywood Desk, Delhi Magazine: Actor Ayushmann Khurrana will soon be seen with Paatal Lok fame actor Jaideep Ahlawat in a stellar action film titled – “An Action Hero”. On this 11th November, T-Series has released the trailer of this movie from its official YouTube channel. 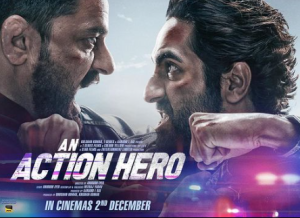 So far, this trailer garnered 22 million views and 253 thousand likes without any kind of anouncement and advertisement.

Talking about the An Action Hero Movie, the Ayushmann Khurrana and Jaideep Ahlawat starrer film is all set to release on December 2. Produced by Aanand L Rai, Bhushan Kumar and Krishan Kumar under the banner of Color Yellow Production and T-Series, the film is being directed by Anirudh Iyer.

Ayushmann Khurrana also shared and wrote on his Instagram”CUTTING STRAIGHT TO THE CHASE!
#AnActionHero Trailer Out Now! 💥”

After watching the trailer people commented about Jaideeep Ahalawat -“Hidden gem of Bollywood”.

One user wrote about Ayushmann,  “You can ignore Bollywood But You can’t Ignore Ayushman”.

People are expecting a change in Bollywood with this movie and wrote, “After a very long time we are going to witness a very very different story in bollywood history..hats off to the script writer,director and very well cast selection…hope from now we can see some change in Bollywood “.

One user review on it, “What a trailer !! After a long time we needed this type of action thriller movie from ayushman after andhadhun!! This is a great shift that is needed for sure for Ayushmann!! Jaideep Ahlawat has literally killed it ! Excited for this movie!!”

Ayushmann’s intense look is looking very cool. Jaideep Ahlawat is also seen in an important role in this. The trailer begins with Ayushmann sitting comfortably in his car and thinking something. Then Jaideep comes and asks him how Vicky died.

Jaideep Ahlawat’s presence in this trailer is strong. The one-liners spoken by Jaideep are sometimes seen overshadowing Ayushmann’s action.

“Ayushmann Khurrana, who has a romantic hero image, is going to be seen in a full on action film for the first time. Ayushmann’s entry in the film is as a masala action hero. Seeing the trailer, it can be guessed that the film has action, comedy, There is going to be a full dose of drama.

With its sleek action and offbeat, satirical sense of humour, the film’s release is eagerly awaited. “An Action Hero” is all set to hit the big screens this 2nd December and the wait of its fans will be over.