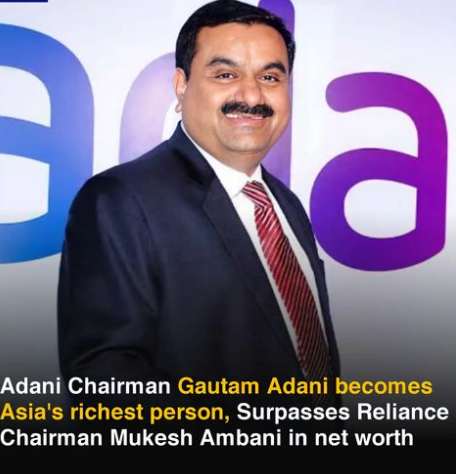 Business Desk, Delhi -Magazine: Adani Group Chairman Gautam Adani has become Asia’s richest person. He has achieved this position by overtaking Mukesh Ambani, chairman of Reliance Industries. According to the Bloomberg Billionaires Index, the net worth of 59-year-old Adani has reached $ 88.5 billion while Ambani’s net worth is $ 87.9 billion. Adani had already overtaken Ambani in the Forbes list.

In terms of earnings this year, Adani has outperformed everyone. His net worth has increased by $ 12 billion while Ambani’s net worth has declined by $2.07 billion.

Adani had entered the world of business from the commodity trading business and today his business is spread in many areas including Ports, Mines, Green Energy. The shares of some of his companies have jumped over 600 per cent in the last two years. In the last three years, the operation of seven airports of the country has come in his hands. His group is the country’s largest private sector airport operator, power generator and city gas retailer.

Meanwhile, Facebook (now Meta Platforms) CEO Mark Zuckerberg has slipped to 13th place in the list of the world’s rich. On Monday, his net worth declined by $ 4.37 billion to $ 85.0 billion. This year his net worth has declined by $ 40.5 billion. In the Bloomberg Billionaires Index list, Tesla CEO Elon Musk remains at number one with a net worth of $235 billion. Amazon’s Jeff Bezos is second, French businessman Bernard Arnault third and Microsoft’s Bill Gates fourth.

Adani started the business with a company of only 5 lakh rupees and gradually built a huge empire. Behind this unmatched success of Adani Group Chairman Gautam Adani, his qualities like hard work, cleverness, skill, networking are there. The story of Gautam Adani, who could not even complete his college education, starts with the diamond business. He moved to Mumbai at the age of 16 and started learning diamond business. He later returned to Gujarat in 1981 and started working in his brother’s plastic factory.

He took his first big step in the business world in 1988, when his first company Adani Exports was started. It started with a capital of just Rs 5 lakh.

Gautam Adani’s total net worth has been $88.5 billion and thus he has brought Reliance Industries Chairman Mukesh Ambani to 11th place because Mukesh Ambani’s net worth is currently at $87.9 billion. In this way he is the richest person in Asia. Let us tell you that even in the list of Forbes, Gautam Adani left Mukesh Ambani behind. However, Gautam Adani has captured the 10th place for the first time in the Bloomberg Billionaires Index.

Since last year, there were reports of a strong increase in Gautam Adani’s wealth many times and now after coming out of this list, it is clear that Adani’s net worth has increased by more than $ 12 billion in terms of earnings this year.

This year, due to the fall in the shares of Reliance Industries and some other reasons, Mukesh Ambani’s wealth has decreased by $ 2.07 billion and due to this he has come from 10 places to 11th place. In this list, Mark Zuckerberg of Facebook (now Meta) has slipped to 13th place.