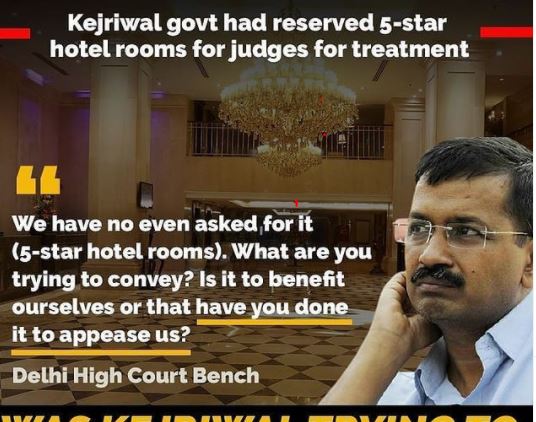 New Delhi, Delhi Magazine, Delhi High Court reprimanded the Kejriwal government over the black marketing of oxygen cylinders and drugs in Delhi amid rising Corona cases. The Delhi High Court said that the Delhi government’s system has failed, as the black marketing of oxygen cylinders and drugs continues. Shanti Mukund Hospital in Delhi told the High Court that the government reduced the amount of oxygen that was provided to it, now the hospital does not have oxygen. On this, the Delhi government said that they are doing their best.

Patients are dying in Delhi

Shanti Mukund Hospital told the High Court that it needed 3 metric tons of oxygen daily and allotted 3.2 but got only 2.69 metric tons. On this, the High Court asked the hospital what is the situation now, on which they replied that the patients were dying. On the reply of the hospital, the High Court said that after all what is the government doing, we are fed up with this government, where is the oxygen at all. The court reprimanded the Kejriwal government and said that action should be taken against oxygen refillers. Also, the court said that this is not the time to treat people like vultures.

The Delhi government said on this that today we are going to pass orders regarding oxygen, it will have all the information, hospitals will know where they are getting oxygen supply from. Also, the Kejriwal government said that we have never been in this business, we are working very hard. The High Court directed that the government immediately provide 2.69 MT of oxygen to Shanti Mukund Hospital.

HC Accused Kejriwal Govt of Trying to Appease it with favours

Kejriwal Govt. had reserved 5- star hotel rooms for judges and court staff for treatment. The court asked the Delhi government to immediately rectify the order asking them to arrange beds in the Ashoka Hotel. The court said that such orders send the wrong message about the judiciary.

We have no even asked for it ( 5 -star hotel rooms) What are you trying to convey? Is it to benefit ourselves or that have you done it to appease us?

Commenting on the attitude of the Delhi government, the High Court said that there is only wrong on every side and you are failing to fix it. You are running the government in Delhi. You are also responsible for improving the situation.