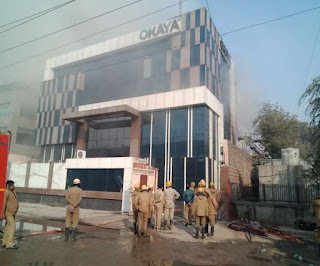 A fire broke out in a battery factory in Piragadhi area of ​​West Delhi early Thursday at 4:30 AM. Firemen were trying to overcome this, when an explosion exploded inside the building and a part of it collapsed. Many people including firefighters got trapped here. This battery factory belongs to Okaya Brand.

According to the information, during the relief and rescue operations, there was a blast in the factory, due to which a part of the building was razed and many people were trapped in it, including three firefighters. As soon as the information was received, seven fire brigade vans were sent on the spot, but due to the horrific fire, a total of 35 fire engines have reached so far.

At present, the NDRF teams are also there and doing rescue work with fire fighters. How many people are trapped in the building is not clear. This is the 1st fire incident in new year in Delhi, while in 2019, about a dozen fire incidents were reported in Delhi, in which more than 100 people have lost their lives.

One thought on “Fire at Delhi / Piragadhi’s OKAYA Battery Factory; Building Collapsed after the Explosion, People Stuck Including Firefighters”