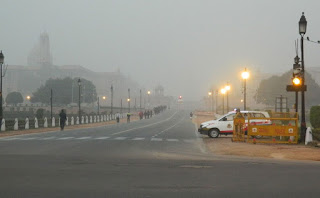 Winter season continues in North India including Delhi. The minimum temperature was recorded at 4.2 degrees Celsius on Friday morning. The winter chill has broken all records of the past 118 years, with December receiving maximum cold waves. Earlier in December 1901 and 1997, the average temperature was 17.3 degrees Celsius, while in December 2019, the average temperature so far has been 19.85. With a dip in Mercury to minus 4 degrees on 28-29 December 2019,  chances are that the cold waves shall continue even in the second week of January. Although sun has surfaced in the first week, the second week may metamorphose into a rainy one. Let’s wait and watch.
The weather report claims the maximum temperature in Delhi could remain around 15 degree Celsius. Due to the foggy weather 21 trains in North India are running late by a maximum of six hours. According to the Meteorological Department, this time is the second coldest month of December since 1901. The day is considered cold when the maximum temperature is at least four and a half degrees below normal, the day is considered ‘very cold’ when the maximum temperature is at least six and a half degrees below normal.
Delhi’s winter is on the verge of breaking the record for the second coldest December in 118 years. The coldest December in 1997 after 1901 was when the average maximum temperature (MMT) of the month was 17.3 degrees. According to the Meteorological Department, the average maximum temperature in December so far this year has been 19.85 degrees, which may be 19.15 degrees by December 31. If this happens, after 1997, it will be the second lowest average maximum temperature of December and the second coldest December. Thursday is the 13th consecutive day since December 14 when the maximum temperature has been recorded at 4.5 degrees above normal.
Train services have also been affected due to dense fog in North India including Delhi-NCR. 21 trains are running late. At the same time, Delhi’s air quality on Thursday was in the category of very poor. The Air Quality Index was down one point to 349 points as of Wednesday. Wind speeds are expected to be 6 on Friday and 4 km per hour on Saturday. The direction is estimated to remain North West. Due to low wind speed, air quality is likely to deteriorate. AQI can go beyond 400 in some areas of Delhi.
Other parts in India: 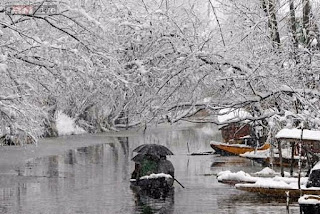 The famous lake Dal Lake has frozen. 2 inches thick snow is frozen on the banks of the lake. Not only this, water has also frozen in pipelines. Trains parked on the road have also frozen. According to the forecast released by the department for the next 24 hours, the cold weather and dense fog will prevail in the northern region due to continuing cold day conditions in most areas of Punjab, Haryana, Delhi, Rajasthan, North Madhya Pradesh and Uttar Pradesh. . While cold wave conditions may increase in some areas of Rajasthan with hailstorms.

Thu Jan 2 , 2020
A fire broke out in a battery factory in Piragadhi area of ​​West Delhi early Thursday at 4:30 AM. Firemen were trying to overcome this, when an explosion exploded inside the building and a part of it collapsed. Many people including firefighters got trapped here. This battery factory belongs to […]