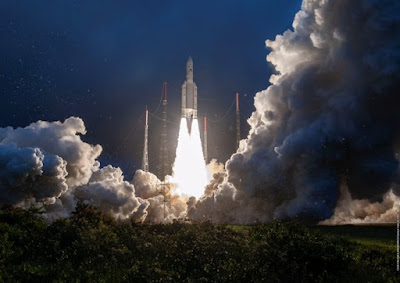 The Indian Space Research Organization (ISRO) successfully launched the satellite GSAT-30 with the help of European heavy rocket Ariane-5from Corou island in French Guena, Franceat 2.35 a.m. on Friday, 17th January. The (ISRO) has achieved this another major breakthrough in the field of technology and communications.
About 38 minutes and 25 seconds after the launch, the satellite was placed in orbit. Weighing 3357 kg, this satellite will bring changes in the country’s communication technology.
This will increase access to Australia with a large number of Gulf and Asian countries along the Indian territory and islands.

The age of the old communication satellite “INSAT-4A satellite” is coming to an end which was launched in 2005. New technology of Internet is coming in the country. Work is underway on 5G. In this situation, a more powerful satellite was needed. GSAT-30 satellite will meet these needs and will replace the “INSAT -4A”.
This will increase the internet speed. Also, where there is no network in the country, the mobile network will expand. Apart from this, DTH services will also improve. It is a telecommunications satellite that has two solar panels and a battery, to provide it energy to operate. India plans to launch 10 satellites in 2020,
ISRO is working on a plan to launch about 10 satellites for the country this year. This includes the Aditya-L1 Satellite. This satellite can be launched by mid-2020. This mission will be the first Indian Mishna(target) to study on Surya. ISRO launched six launch vehicles and seven satellite missions last year.