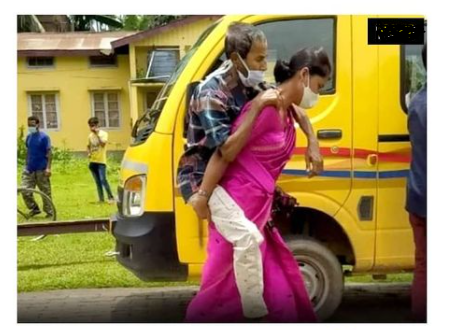 A photo of 24-year-old Niharika Das, a resident of Nagaon, Assam, is going viral on social media. In this, she is seen carrying her Corona positive father-in-law on her back. Niharika walked about 2 km carrying her father-in-law on her back. The irony is that during this she became the object for photography for many,  but none came forward to help. After the photo went viral, people are now calling Niharika the ideal daughter-in-law. However, even after so many efforts, Niharika could not save her father-in-law.

June 2nd, symptoms of corona were seen in Niharika’s father-in-law Thuleshwar Das. Thuleshwar was a betel nut vendor in Bhatigaon of Raha area. When his health deteriorated, daughter-in-law Niharika arranged a rickshaw to take her to Raha’s health center, that was 2 km away.

For the same, she carried her Father-in -Law on her back to the auto stand.  Since there was no road for an auto rickshaw to reach her house, she was bound to take this step. Her father in law could not walk owing to the weakness. She further explained that her husband lives in Siliguri for work. In such a situation, she said, “I had no option but to take my father-in-law on the back”. I took my father-in-law to the auto stand. Niharika also has a 6 year old son.

Niharika said that even after reaching Nagaon, I had to climb the stairs carrying my father-in-law on my back to Covid Hospital. There I asked for help, but no one came forward.

She felt alone and completely broken.
Niharika is also corona positive. She is being touted as the ideal daughter-in-law on social media. She is being praised everywhere. From local news channels to big journalists are contacting her. Niharika is happy with this. She said that everyone should help each other. However, Niharika said that there is one thing missing in the photo, that is, I felt alone and completely broken at that time.

Irrespective of the effort, she could not save father-in-law.  This story of Assam has exposed the health condition of the village. Niharika said that she did not even find an ambulance in the village. We had to come to the city in a small van. The good thing is that during this time the father-in-law did not need oxygen. However, both were referred to the Medical College in Guwahati on June 5, where Thuleshwar Das died on Monday.