Skip to content
Prevalence of peace is always in the best interest of the citizens of the country. However, off late some part of our country has experienced turmoil and disturbance due to difference of opinion among the government and its people on NRC and CAA. Protests are being observed in most areas of the capital where sleeper modules have been activated during the protests in riot-affected areas other than Delhi as well. Radical modules involving Indian Mujahideen and SIMI have joined the protest with preparations to incite subversion, arson and rioting.
In view of the massive protests against the CAA on Friday, Delhi Police has imposed Section 144 in the areas around the Red Fort, including Central Delhi, prohibiting the gathering of people and to maintain a peaceful situation. As a result, stringent security arrangements have been made during this period where additional security forces have been deployed.
Not just Delhi, even in the adjoining areas constituting strong religious beliefs are also active in the protests against the new act passed.  The Delhi Police is active and has further given an input pertaining to disturbances being done by citizens of  Mewat, Noonh and its surrounding areas who may also enter Delhi through trains and spread violence. In view of this, barricades have been lodged at the Gurugram border to prevent disturbances. Other than Delhi, many parts of North India are also under the influence and are strongly protesting the citizenship law. This was highlighted when a police post was set on fire in Lucknow on Thursday. Most of the students were seen protesting as their naive minds have been poisoned against the law.  And where there is no one to blame, politics is blamed making people say that the riots are planned!
In Uttar Pradesh’s Aligarh and Jamia, students took law in their hands and damaged government property, inadvertently involved in crime. People of the Northeast were also tricked against this law. What were the issues in the Assam Accord that was signed with the Asom Gana Parishad when Rajiv Gandhi was the Prime Minister? When this government implemented NRC keeping everyone’s interest in mind, ruckus was created. After that when the Citizenship Amendment Bill became law, political parties are engaged in collecting their vote bank by spreading religious hatred. West Bengal Chief Minister Mamata Banerjee has led the movement herself. This gave rise to anti-social elements and they challenged the system of the country. The same happened in Jamia Millia, Delhi. Successful attempts are being made to break social harmony in Muslim areas of Uttar Pradesh.
Thousands of protesters were on the road during the violence. Some videos have also surfaced, in which protesters are seen attacking the police. Additional DCP of North-East District Rajendra Prasad Meena admitted that he did not anticipate such a large and violent demonstration, despite the situation being properly controlled. Police said they had to resort to lathicharge, tear gas as well as aerial firing to control the crowd.
DMRC had closed many metro stations in Delhi earlier affecting the transportation.  Having said that, the civilians have faced more than anyone else. Due to these demonstrations, thousands of servicemen working in the ministry and offices had to face a lot of trouble. The result was that passengers who had to go to the nearby metro station were forced to enter several kilometers from another metro station. The reason why R.K. How many stations, including Ashram, Rajiv Chowk, Huda City Center, got a long line for admission in the evening. The entry and exit of the metro has been closed to prevent the protests. 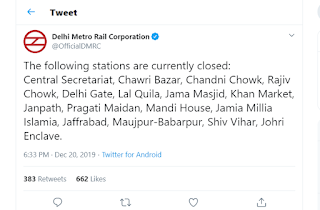 What is Internet? Who Created it? Who Regulates it?

Fri Dec 27 , 2019
Reading news, getting notes for your next exam, talking to your friends and relatives, booking tickets etc. Are few of the many tasks which have been made quick and easy by none other than internet. The other uses of Internet includes; socializing, digital marketing, dating, online shopping, communication, exchanging emails, […]