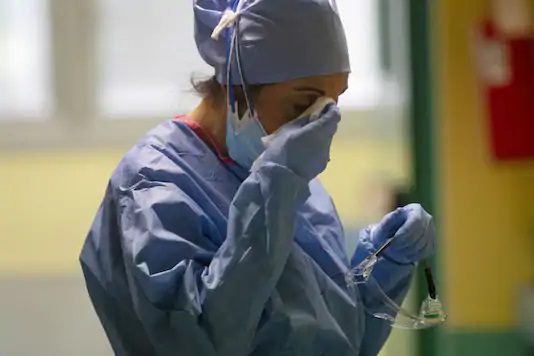 “He kept saying,” Let me do what I want or I’ll kill you. Stand still and don’t scream. “He was not a man, he was a beast for forty-five minutes. He was double me and all his weight was on my back. He got angry, because I had too tight jeans and he couldn’t get them off.
Forty five minutes when I realized that my strongest fear was dying … “.

Aisha (invented name), 48 years old, victim of sexual violence that occurred in broad daylight and in the city center. Corso Arnaldo Lucci, parking lot of the Metropark (full of cameras) in the early afternoon of Sunday of last week. The rapist was later arrested by the police. y

Fear of dying, she said, Aisha …
“Yes, because the horror of being raped was overcome by the shortness of breath. That man was on me and clutched his arm around his neck from behind. I was suffocating”.

Can you tell us how it went?
“I am a nurse in a public facility. I work in a psychiatry department where we are taking care of the Covid ” veterans “. They come out traumatized by the disease and we follow them with affection and attention. Sunday, after work, I was going home to Avellino, and after taking the subway, I had arrived at the Metropark early. The bus to Avellino, due to the reduced travel for the Covid emergency, would have left an hour later. At half past two in the afternoon there was no living soul, so I sat on a bench waiting. ” What happened next?
” Suddenly this huge and big man (an irregular Senegalese Muslim migrants in Italy, will then ascertain the police, ed) climbed over a fence and came towards me. I was immediately afraid, he looked threatening. He grabbed my arm. I immediately thought of a robbery: so, to save myself, I gave him the bag. “Take it all, there is money,” I said. The answer chilled me. He said, “I don’t want your money, I have it.” Then he yanked me and threw me on the ground. I saw my cell phone fly away, it ripped my jacket off me. I realized it was over for me. ”

And what did he do?
“I crouched on the ground to protect myself, but he took me behind him. With all his weight he put himself on my back causing me immense pain. I can’t say if the physical or mental one was stronger. He put his hands in my hands everywhere and he got angry because I defended myself. He said absurd things, as in a litany: “I kill you, I have to purify you, I remove the fire you have inside. You have to strip yourself of everything, get dressed and comb your hair like I say. “I felt but I didn’t breathe with that hand over my mouth. At any moment I thought: the bus will soon arrive, soon someone will appear. Hold on Aisha, hold on, you’re stronger him. You have to do it, you have to win … “.

How long did this real nightmare last?
“Forty-five minutes, an eternity. Then a woman passed, she must have been forty years old. She saw everything. I was able to shout:” Help me, call the police, the carabinieri, please. ” disappeared. She did nothing. Other than solidarity between women. Sometimes women, among them, know how to be bad and indifferent. I have not had hallucinations, she was filmed by cameras and the police are trying to identify her. ”

So the nightmare went on without anyone helping her.
“Nobody. The city was deserted. In forty-five minutes no police car was seen. The city cannot be left to itself. The cameras have filmed all the violence, but nobody was watching those live footage, otherwise he would have intervened immediately. They use drones to find people who go to the beach despite the Covid emergency. Why don’t they use them to prevent these and other attacks? “.

Yet it managed to defend itself.
“I thought I was stronger. I lied to save myself. I told him not to hurt me because I was pregnant, I told him that I couldn’t breathe and that I needed water, and then I told him that if someone came he would He was arrested. But he kept trying to tear off my jeans. My back was shattered, my neck was full of bruises. He said, “If you scream I’ll kill you” and then he raised his hand from my mouth in an attempt to turn around and put me with the back to the ground. I clung to a rubbish bin to prevent it. Until the bus arrived … “.

And what happened?
“The driver saw what was going on, got out and started screaming. In the meantime, however, the Army arrived. Three soldiers surrounded him and at that point I managed to get up and took refuge on the bus. Then she arrived even the police, four cars to block that unclean being. They didn’t leave me anymore. They took me to the hospital, my reaction was a fever, such was the shock. The police warned my husband. They saw the videos , some policemen did not make it to the end out of anger and disgust. But I want to say thank you to the steering wheel manager (the deputy commissioner Francesca Fava, ed. ), who understood what I experienced “.

How are you now, Aisha?
“Bad. I didn’t go back to work, I had to live the pain of my daughter who feels hurt as a woman and as a daughter. And that of my husband who feels guilty and helpless for not being able to protect me. They are traumas that overwhelm all the family. But the thing that hurts me most is the fear that I had of death and that now prevents me from smiling. It is important to my work. We help many people who are unable to reconcile with life after a trauma. Now it is Covid, but I have followed many women who have suffered violence . And everything is based on communication. Now it seems to me that I can no longer transmit, for those who need it, the interest in life. Even with a smile. Instead I can only live my pain “.