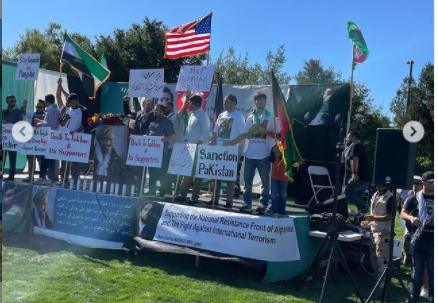 International Desk, Delhi- Magazine: On September 10, a group of Tajiks living in the United States gathered in front of the UN building in New York to call for peace in Afghanistan.

Abdurahim Umariyon, a Tajik journalist and one of the organizers of the rally, posted videos on his Facebook page about a group of Tajik activists walking towards the UN building with placards in their hands “Peace to Afghanistan”, “Do not leave Ahmad Masud and Panjer alone with the terrorist Taliban.” , “Justice for Panjshir”.

A poster with the slogan “Panjshiri life is also important”, which was held in the hands of one of the participants of the march, repeated the calls in American society for the past two years (“Black life’s matter” – the life of blacks is also important), which appeared due to human rights violations for African Americans in the USA.

Some of the marchers were holding the Tajik flag. This was the first meeting of a group of Tajik representatives abroad in support of Afghanistan. The government of Tajikistan has stated that it does not recognize the Taliban government, which will be formed without taking into account the position of the entire Afghan people.

The rise to power in Afghanistan in mid-August by the Taliban, which is recognized by the United Nations and many states as a terrorist organization, has raised serious concerns for the country’s future. The resistance of the National Front under the command of Ahmad Masud to the Taliban in the Panjshir Valley has been going on for 10 days, and there are growing voices and criticism from the United Nations and some other countries that Afghan peacekeepers were left alone with the Taliban.

The Taliban during their reign 1996-2001. established a regime based on strict observance of Sharia norms in the controlled territory, severe punishments were introduced for violation of the order – amputation of limbs, stoning, public executions. And now, with the coming to power of the Taliban, there are again reports of acts of violence on their part.

Earlier such protests have placed in Delhi and London in support of Ahmad Masud and against Taliban and Pakistan.