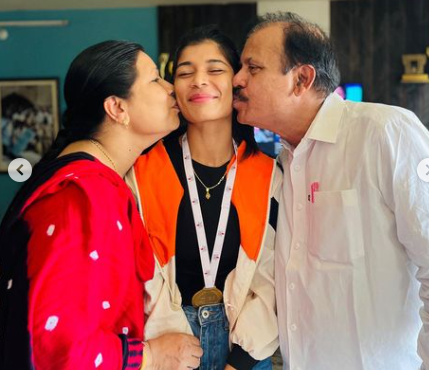 Inspirational Desk, Delhi – Magazine: “A Girl is Born… ” On hearing these words, there used to be a pin drop silence in the house which was awaiting the birth of a Boy child.

Not only the silence, but also the other inhuman deeds associated with it, even the soul used to tremble. Somewhere, it was also heard that after the birth of the girl, she was even murdered inhumanly. Then there came a time when pre-natal sex determination test started, those who wanted a boy got their wish, as they started getting the pre-natal sex determination in every pregnancy. As soon as it is found in the test that the girl would be there, then they got the abortion done. This abortion did not happen once but repeatedly. The more times a girl is detected, the more often she will miscarry even if the mother is too weak for the same. But the people with frustrated mentality wanted only a boy.

The boy who will carry on their lineage, will illuminate their name and will be their support in their old age. Even after declaring pre-natal sex determination as illegal, this work went on secretly for a long time. When they could not get the sex determination test done anywhere and the girl was born, then these people with frustrated mentality used to make the life of that poor innocent girl worse than hell. These girls lived a life worse than the maid and they were brought up as a burden. Even a few people who used to accept the girl child but somewhere in them it used to be in their mind that teach these girls to do household chores only as they belong to some others family after marriage (as Praya Dhan).

They used to believe that after marriage, she will go to her husband’s house and only do the household work there. There is no need to teach and educate them. Such a thinking remained in the society for a very long time.

As per Rohini Vincent, an officer with Income Tax Deptt, “People were afraid that if the girls would go out to work, then they would not do the household chores, will not take care of family. Perhaps this was one of the reasons that they did not want to educate girls.”

Beyond the above mentality there were some good people in the society for whom neither girls were curse nor slaves. For these people there was no difference between a boy and a girl.

But such girl was the father’s angel. And the father used to raise them like fairies. These were the people due to whom the girls not only got the opportunity to learn and get education but the girls proved themselves that they are not less than the boys in any way.

Today girls are working shoulder to shoulder with men in every field and every department. It would not be wrong to say that they are not only working side by side with men but also doing a better job than boys. Today girls have proved themselves in every field. Girls are achieving great positions by working hard and accepting the challenge of proving themselves.

Be it climbing mountains or proving yourself in the field of wildlife photography etc. Girls not only roam around forming girl gangs in their spare time but also follow their hobbies and passions.

According to Megh Roy Choudhury, one of India’s well known National and International award-winning Wildlife Photographers- “Behind my success there are two men without whom it was not possible – my dear father and my husband. Without their support it would not have been possible for me to be there where I am now.”

According to Ms Latha S Menon, an officer with IT Deptt.,” A thorough Administrator, handles home and office With ease and elan with an etiquette that’s spic and span. A great source of strength, true to the supreme word Shakti. With all the might is an entity to reckon with women are the gifted lot with a sense of responsibility towards one and all. Women are the one ready with solution. She is all roles imbibed into one that of a grandmother, mother, daughter, sister.”

The girls also made their name in the Tokyo Paralympics. Avani Lekhara became the first Indian woman to win 2 Paralympic medals. There are thousands of other examples as well. If we talk about the recently announced UPSC results, without looking back, it can be said that today is the day of girls.

That is, girls have not only proved that they are no less than boys in any respect, but they have directly proved that father’s fairies are the best and the world is now theirs. Not only today but tomorrow also belongs to them.

It is a slap in the face to all those who are sad at the birth of girls. They should check the recently declared UPSC exam result. Today papa’s fairies have made them proud by illuminating the name of father better than boys.

(This article is written by – DR VIKRAM SINGH)