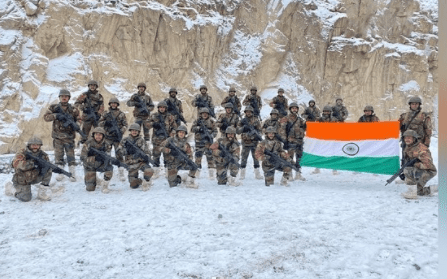 In this picture, Indian soldiers are giving a clear message of their dominance in the Galvan Valley by waving the huge tricolor in a spirited style amidst the all-round frozen ice sheets near the Galvan River. Responding to China’s propaganda with their rifles in front of the Indian Army’s inspection post on the New Year, Indian soldiers are also seen giving a message of responding strongly to China’s challenge on the LAC.

These pictures have come to the fore after the release of a video in which PLA soldiers are hoisting the Chinese flag and singing the national anthem in their area in Galwan. Now pictures of Indian soldiers are being seen as a response to China’s propaganda in Galvan, in which Indian armed soldiers are seen stationed on the LAC.

Around 30 Indian soldiers can be seen with the national flag in one of the images released by sources in the Indian security establishment. Another picture showed a group of four people holding the national flag and another waving the tricolor on a flagpole adjacent to a makeshift surveillance post. Sources said that this picture was taken in Galwan Valley on January 1. Indian and Chinese soldiers exchanged sweets and greetings on January 1 at 10 border points along the Line of Actual Control (LAC), including in eastern Ladakh and north Sikkim, which was seen as a warm sign amid the ongoing dispute in eastern Ladakh.

Uproar Over Appointment of First Lady Judge in Pakistan

Wed Jan 5 , 2022
Asian Desk, Delhi- Magazine: The appointment of Justice Ayesha Malik, the first woman judge in the Supreme Court of Pakistan, seems to be stuck. The final decision on this issue is to be taken in the meeting of the Judicial Commission of Pakistan (JCP) to be held on Thursday. The […] 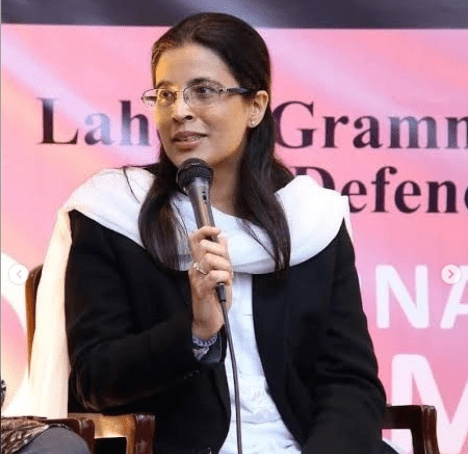