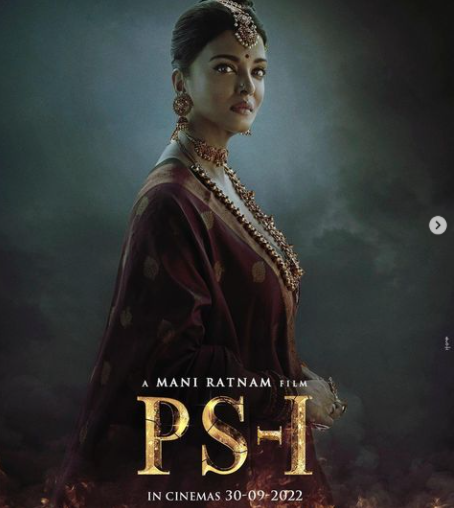 Bollywood Desk, Delhi- Magazine: Mani Ratnam is once again coming up with a drama film ‘Ponniyin Selvan’, in which Aishwarya will be playing an important role. The film will come in two parts, the first part is named ‘PS1’, whose shooting has been completed. Aishwarya Rai Bachchan Shared the Poster from this movie on her Instagram account

Within just 8 hours it goes viral on instagram and more than 3 lakhs people have liked this post. The film tells the story of Arulmozhivarman, one of the kings of the Chola dynasty during the 10th and 11th centuries. In this film, Aishwarya is playing the role of Nandini, the villain of the film, who is hungry for power. She plots the downfall of the Cholas through manipulation with her husband Periya Pazhuvettaiar.

A source close to the film said, “Most of the scenes in the film include Aishwarya Rai opposite actor Vikram, who plays the role of Rajkumar Aditya Karikalan in the film. Vikram and Aishwarya have worked together in the 2010 Hindi film ‘Raavan’ under the direction of Mani Ratnam.

This film is Mani Ratnam’s mega budget film. Apart from Aishwarya, many famous artists have been taken in this. Actors like Vikram, Karthi, Trisha Krishnan, Prakash Raj, Jairam, Jayam Ravi and Aishwarya Lakshmi have worked in this film. Lyca Productions is producing this film.
This film will be released this year i.e. 30 November 2022.

The news of Aishwarya’s casting in PS-1 had been doing the rounds for a long time, but this is the first time she has confirmed it with her official account! On this post of Ash, his fans have given a tremendous welcome to her return!

You would also like to read: Tara Sutaria’s sister Pia Sutaria.