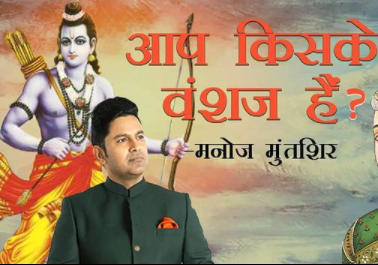 Bollywood Desk, Delhi- Magazine: A new debate has started in the media these days. Recently, director Kabir Khan had called the Mughals the real nation builders in an interview. He also said that he cannot respect the films in which the Mughals are shown wrongly. After this statement, lyricist Manoj Muntashir shared a video, Manoj Muntashir took a dig at the Mughal rulers, calling them ‘glorified dacoits’.
And he said that Mughals were invaders from outside, how can it be ideal if someone comes from outside and takes possession of your house and makes your family members their slaves?

“For the last several centuries, we have left the lands of our history unclaimed. We got brainwashed to such an extent that suddenly Ganesh was changed from c to donkey from our pre-primary text books and we did not even have a force on our forehead. The roads leading to our house were also named after glorified dacoits like Akbar, Humayun, Jahangir and we kept on applauding as we saw the opportunistic leaders cutting the ribbon.

He asked people how is Akbar an Ideal king?

Who was the ideal king to kill 30,000 civilians in Chittorgarh in the name of Jihad? Jilleilahi was the one who got the Meena Bazaar installed in front of the Agra Fort? Jilleilahi, that is, the shadow of God. Which God is this, whose shadow is so dark?

Ravan was a Brahman but, he was a bad man, so brahman people worships Ram instead of Ravana

Choose your heroes and villains irrespective of caste, which is the tradition of this great country. Ravana was a Brahmin. Born in the direct blood line of Lord Brahma, but have you seen a Brahmin praising Ravana? But in our country still their are many raods on the name of Orangzeb, Akbar. And still muslim and some librandu and talibani category people in our country praise these glorified dacoits.

Seeing the content of the video, mostly people support the him said- Said the right thing while some people like richa chadda did negative comment on it.

An independent journalist, Shiwanand Dwivedi, replied his tweet, “You have set foot on the tail of propagandaists Irfan Habib, Romila Thapar, Vipin Chandra.”

Another twitter user wrote a comment on this video, “More power to you Raising hands
Now a whole lobby will try to silent you from speaking the truth because that’s what they are doing since long. They don’t want people of India to enlighten with truth.

Mughal glorification is ubiquitous. See the description of this song. Akbar, the pride of India.

AN INVADER CAN NEVER BE THE PRIDE OF INDIA.”

Another user a Tibetangirl replied his tweet and wrote, “Manoj Sir, Now you will be haunted for speaking Truth because we Indians think that NCERT history textbook covers everything about Indian history Please stay safe, I will not be surprised if YouTube removes your video in next few days and Twitter tagging this video with warning”.

Television Journalist and Anchor & Editor, Ashok Srivastava replied his tweet and wrote. “Great. May God give you infinite energy and strength.”

Another tweeter user Lekhraj  Sapkota1 wrote on his video, “Yes. Really we don’t know why we were taught like this? Why were we Indians kept away from our history and culture?”

A journalist Anil Singh replied and wrote. “Explained well !!!!!!!!!! All truth passes through three stages. First, it is ridiculed. Second, it is violently opposed. Third, it is accepted as being self-evident”.

Supreme Court Advocate and editor at goachronicle wrote on this, “You have shaken my heart with this short video.
Waiting for full video Folded hands.”

Another twitter user, N.Ramchandran wrote on his video, “I agree with Manoj Muntashir . We have been indoctrinated at school with only information and the glory of the Mughals and the monuments they built, most of which were largely in their attempts to either fortify their rule or glorify themselves and their kin.”
When  a special lobby of third class celebrities like Richa Chadda, Those who could not succeed in Bollywood are thinking of getting fame by opposing Manoj Muntashir. People on social media started a hash tag with #isupportmanojmuntashir. Even Shefali Vaida replied Richa Chadda (who is supporter of Safura Zargar and other tukde- tukde gang)  with this tweet.

Why Manoj Muntashir is so much famous:

Manoj needs no introduction today. Today, with the help of his pen, he has left his mark in the whole world.

He has written the lyrics of the song “Galiyaan Teri Galliyan” from the movie Ek Villain.

He has also written the lyrics of the song “Tere Sang Yaara” from the 2016 film Rustom.

In the same year, he wrote the lyrics for the song “Kaun Tujhe Yoon Pyaar Karega” from the film MS Dhoni: The Untold Story.

He has also written the lyrics of the song “Dil Meri Na Sune” from the film “Genius”.

He also wrote the lyrics of the song ‘Teri Mitti’ starring Akshay Kumar in the 2019 film Kesari, for which he received a 2020 Filmfare nomination for Best Song.

He also shared the some youtube video on Haldighati War.

He also wrote dailog of Bahubali movie, ” Devsena ko kisi ne hath lagaaya to smjho, bahubali ki talwar ko hath lgaya(If someone touches Devasena, consider it to touch the sword of Bahubali)’ and ‘Aurat par hath dalne wale ka hath nhi katte, katte hai uksa gala (Do not cut the hand of the one who puts his hand on a woman, we need cuts his throat)’, these are the dialogues, due to which Bahubali became the favorite film of children and children.

He is also famous for his youtube videos on Haldighati war:

Who is Manoj Muntashir?

He was born in Gauriganj, Amethi! His father was a farmer, mother was a primary school teacher. Mother’s salary was only 500 rupees, but she got Manoj educated in a convent.
Manoj was fond of writing since childhood. He read the book Diwan-e-Ghalib when he was in class 7 or 8.

But he didn’t know much Urdu words meaning, so it was difficult to understand that book. To write a song, it was necessary to know Urdu.
He was from a Pandit family, from whom would he have learned Urdu. Then one day he bought an Urdu book for Rs 2, in which Urdu was written along with Hindi.

In 1997, he got Rs 135 as his first salary for working in Allahabad All India Radio.
When he reached Mumbai in 1999, Anoop Jalota ji asked him to write a hymn. For that Anoop ji gave him a check of 3000 rupees. That was his first salary in Mumbai.
A Star TV official made him meet Amitabh Bachchan.
He was selected after a 20-minute meeting and got a chance to write lyrics for Kaun Banega Crorepati in 2005.

Mayawati’s BSP has got the party’s anthem written by lyricist Manoj Muntashir.