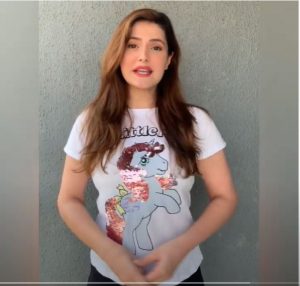 She is one of the most hottest and bold Bollywood actress and widely known for her song -“Character Dheela“. Zarine Khan is making everyone crazy with her beauty, hot figure and acting. She made her Bollywood debute with Salman Khan in the 2010 through “Veer” Movie. This movies wasn’t so much successful, but she impressed everyone with her hotness and acting skills.

She also stated that after all, she had started it and she is very happy about it. This will not only present her life as an actress, but will also talk about other aspects of my life. This is a golden opportunity for both her and her fans to connect with each other.

In this Youtube channel , she has uploaded only 2 videos so far.

And just only with two video she has gained more than 3.63K followers on her channel.
She uploaded her 1st video on 16th, April, 2020. More than 4k people like this video. She told in her 1st video that she will talk about mostly travel and fitness in here upcoming videos as well as fashion and cooking also.

Her channel link is bellow:
https://www.youtube.com/channel/UCMPBY1juEz6pzNu0pa2dlnw Zarine will keep posting regular videos, which will expose various aspects of her life, which her fans and general audience have not seen or know about till date. This is just a new way to connect personally with her fans.