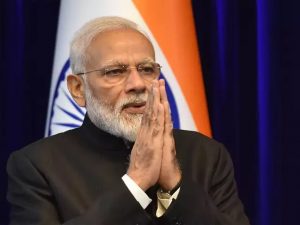 Delhi Magazine, April 22, International News: Prime Minister Modi has stimulated respect among the citizens of the country and the among the who’s who of the world due to his intelligent decisions to fight the Corona Virus. This is not said in vain and is reported by a recent research by an American data research company called ‘Morning Consult’, it has been found that among the leaders of 10 big countries Indian leader Mr. Narendra Modi is the most effective leader in dealing with corona pandemic. . Modi is at number one with 68 points and Mexican President is positioned at number two with 36 points according to this research report.

After three-plus years of consistently negative approval ratings, President Donald Trump has began his journey towards securing better marks for his effective ways of dealing with coronavirus in the US. For the commendable efforts and the onset of this positive outlook he has been placed 8th in the data given by Morning Consult.

Further in the line are leaders from France (President Emmanuel Macron),  Japan, (Prime Minister Shinzo Abe) who have received  9th, and 10th place. Japan’s PM Shinzo Abe ranks last on this list because his government preferred the Olympic Games over preparations to fight Covid-19 and got too late for the same.

The gist of steps taken by Prime Minister Modi has been truly significant in controlling the pandemic. He announced the lockdown in the country in time, thereby mitigating the expected losses of life owing to this epidemic. When the need arose, he discussed with the Chief Ministers of states and decided to increase the lockdown. This decision of India was also praised by the World Health Organization. Allocating positive names such as ‘Corona Warriors’ to the volunteers and administrative staff including health workers, policemen and others working was a much needed way to boost their morale.

With a strong foothold in the hearts of the citizens, PM Modi also conducted and asked the nation to perform activities such as candle-lighting and cheering within their homes simply to praise the ‘Corona Warriors’ who are fighting with this pandemic by helping others and most important by being away from their own family.  This was followed by one and all showing the respect towards the righteous activities being conducted in the nation.

WHO also praised Modi for a few more vital decisions that he took to protect the citizens of India. s

Not only in the country, but PM Modi also helped other nations too by procuring and proffering some eminent drugs such as hydroxychloroquine which is helpful in fighting the Corona Virus. This has been sent to the US and other countries that are fighting corona. Praises from Trump and President of Brazil are reflective of their thankfulness towards the PM Modi. Recently they announced to send these medicines to Dubai also in order to fight this pandemic.