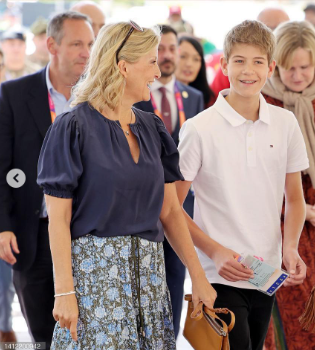 Fashion Desk, Delhi Magazine: The 57-year-old Countess of Wessex, along with her daughter, 18-year-old Louise Windsor, son, 14-year-old James Viscount Severn, and husband Prince Edward, spend time at the Commonwealth Games. The other day, she delighted fans with a stunning ruffled floral print midi skirt from one of the royal family’s favorite brands, ME+EM. Hellomagazine writes about it .

The Bright Paisley Maxi Track Skirt is around £185. Sophie of Wessex paired a bright bottom with a navy blue blouse and black sandals. 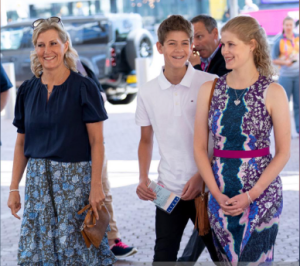 Lady Louise Windsor, 18, who accompanied her famous mom to the event, also looked stunning. She tried on one of Sophie’s outfits, a Peter Pilotto sleeveless dress with a whimsical abstract print in bright colors. Sophie of Wessex first wore this dress to the Chelsea Flower Show in 2015.

The wife of Prince Edward is considered a style icon. She has already appeared at the Commonwealth Games in other fashionable looks. Stylish outfits included a dazzling floral print dress by Peter Pilotto and leather espadrilles by Penelope Chilvers. As well as a Cloqué dress with round neckline and short sleeves.

As you know, Sophie is not the only fan of this dress. Lady Kitty Spencer – Princess Diana’s niece – recently appeared on a radio station in Australia in exactly the same outfit. She styled the dress with high heels and jewelry.

Recall that the Commonwealth Games will last until August 8. The event promises to be the biggest sporting event in UK history since the London Olympics ten years ago. This year, the opening ceremony of the Commonwealth Games instead of Queen Elizabeth II was held by her eldest son, the heir to the British throne, Prince Charles.