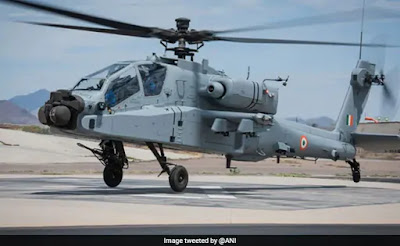 Apache AH-64E, a popular fighter helicopter is added in Indian Air Force fleet. Apache Helicopters have so many specialties, that why, Indian Government ordered it to American Government and US aerospace company Boeing in 2015. A single Apache Helicopter  can fire 14 missiles simultaneously.
The 1st batch of 8 Apache AH-64E helicopters was received at Ghaziabad’s Hindon Airbase last week.

On the occasion of adding these fighter helicopters in IAF fleet, different types of prayers were performed by all religious leaders at Pathankot Airbase. In the presence of Air Chief Marshal BS Dhanoa, these choppers were given a water cannon salute in the ceremony.  Apache’s squadron commander stationed in Pathankot will be Group Captain M. Shailu. It is being told that Apache is one of the world’s multi-role combat helicopters. Apache replaced the Russian-made Mi-35 helicopter.

1. It can attack at night
Apache is able to fight in night. It is equipped with laser, infrared and night vision systems, so that it can do all the work of enemies even in the dark.

This helicopter is also not able to easily catch by the radar of enemies. This is mainly due to the semi-stealth technology of the helicopter and its ability to fly at low altitudes. It is equipped with state-of-the-art longbow radar.

3. Equipped with Hellfire and stringer missiles:

The Apache fighter helicopter consists of 16 anti-tank AGM-114 Hellfire and Stringer missiles. Hellfire missiles can fly any armored vehicle such as tanks, cannon, BMP vehicles in an instant. The stringer missile is capable of withstanding any threat from the air. Along with this, it also has a Hydra-70 unguided missile which can destroy any target on the ground.

Some other minor specialties

Mon Sep 9 , 2019
Due to poor economy, Pakistan government is ready to do anything for luring investors. A new example was shown in Azerbaijan country where Pakistan government arrange a Belly Dance to lure investors. The conference was organized to bring foreign investment in the Khyber Pakhtunkhwa province of Pakistan. In the program, Pakistan […]