Skip to content
If You got an SMS regarding Independnce Day, behave normal. Becuause, this an automatic message by PMO to greet every Indian on 15th August on the Behalf of our PM Narender Modi. Narender Modi also addressed to our country from the Wall of Red Fort. He gave an awesome speech on current situations. He warns Paksitan in his speech not to appriciate the terror. He also thanked people of Bluchistan, Gilgat, Baltistan to favor India. He not just warned only Pakistan as well as also indicate China also for POK region for their wrong intentions.

He served a strong speech against terrorism and maoism and warned.  He remembered all ex political leaders like, Mahatma Gandhi, Subhash Chander Bosh. 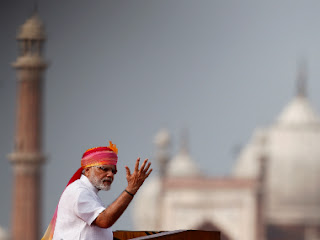 A red turban and white Kurta Payjama gave him a lion look. He invited neighboring countries to fight against poverty as well as feel synpathy on Peshawar attack on behalf of our country.

He also talk about GST billls and employment and adhar card planning.

I am here stated the message what I got today on the behalf of our Prime Minister-
” Independence Day greetings to you. We salute our freedom fighters. Jai Hind! You can hear my Red Fort …..”
”