I got this news through SRK twitter Accounts.  Shahrukh Khan tweeted,
“I fully understand & respect security with the way the world is, but to be detained at US immigration every damn time really really sucks.”
This is not the first time, When he faced the problem at American Airport. The pic of that tweet shown below :- 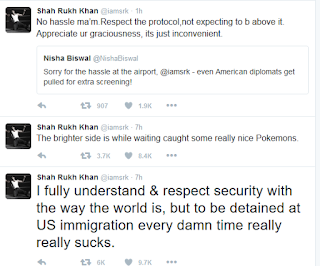 In this time, however, he found a silver lining as he “caught some really nice Pokemons” while waiting, he tweeted.

The thunder bird Varsha singh also tweets on sympathatic tweets about his trouble in America. The TVFplay also comment on their twitter account “US police detained ShahRukhKhan at airport and Indian police can’t even detain an actor on Footpath.”
Freemalaysiatoday also has given place to this news.  We hope, It will never happene with him or any other good personal of  our country. No doubt, He is a great India actor who apears in always good family movies like:- Kabhi Khushi, Kabhi Gham, as well as romantic movies like DDLJ, That was the biggest block buster in his career.