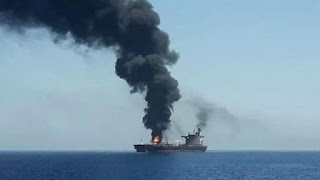 A missile attack has been feared behind the explosion in an Iranian oil tanker near Saudi Arabia’s Jeddah port on Friday. The tanker’s company expressed this apprehension. The explosion in the ship caused oil spills in the Red Sea. Irani’s news agency ISNA has reported that two Vessel tanks have been badly damaged by this attack, putting the risk of oil leaking in the Red Sea.
The Iranian Oil Company’s ship, 120 km off the coast of the Saudi Arabian port city of Jeddah, caused a huge fire. According to sources, the ship’s crew is safe and efforts are on to control the fire. Some people considered it a revenge of Attack on Saudi Oil Processing Company Saudi Aramco.

According to the news agency Reuters, oil prices rose by two per cent after the attack on the Iranian oil tanker. The international benchmark crude oil price rose 2.3 per cent to $ 60.46 a barrel from $ 60.13 a barrel. At West Texas Intermediate, crude prices rose 2.1 percent to $ 54.69 a barrel. It was earlier at $ 54.47 per barrel. On the other hand, due to sanctions imposed on Iran by the US, about 300 tankers all over the world have distanced themselves from trade. This may lead to further increase in oil prices in the coming days.
According to Al Jazeera English , “Oil prices jump by more than 2% after an Iranian oil tanker was hit by two suspected rockets off Saudi Arabia’s port city of Jeddah.”

Tue Oct 15 , 2019
Trekking in India is always an amazing activity to explore and see the serene beauty of nature. Walking, climbing, hiking are some other names for trekking. Himachal Pradesh and Uttarakhand are the two scenic destinations famous for trekking in India. You will see a lot of rivers, waterfalls, greenery, mighty […]