India, the land of stories. India, a country which came up with epics like Mahabharata and Ramayana. India, a country where everyone is a storyteller and we’ve grown up hearing the bedtime tales of Aladin, The Wicked Witch with twisted legs, the boogeyman, Chacha Chaudhary and a lot more. A country where every nukkad tells a different story and cinema is the main source of that. India being one of the biggest consumers of cinema where people can forget to eat food but not to watch a movie is now restricted to specific genres, stereotyped as lovers of only romance, drama and crime but India is a lover of stories and That has been missing from almost a decade now.

“As a kid I was an introvert and I used to stay most of the time inside my room only reading books, watching movies. For me movies were like a gateway to another world, I could be whoever I wanted to be through Cinema, living a life that I never could in real life. If i wanted to be a superhero i’d put on Spiderman or batman, if I want to be a spy I’ll play james Bond, if a lover then Kabir Singh and vice versa. This power of Cinema was wonderful but I saw that in India, a country which created epics, we have still not been able to create such hollywood-ish genres on our own, we don’t have a superhero or an action universe or a supernatural universe or a science fiction and that disappoints me. That’s how Moon – The Indie Cinema came to existence, to open more gates for whoever is watching to give them a chance to live a new character” – Sankshay Babber (Founder, Moon – The Indie Cinema)

Moon – The Indie Cinema launched on 4th of February 2021 is the cheapest OTT platform in the Country where you can stream hundreds of Films at just ₹32/- a month.

“The idea of Moon was not just to create more movies but also to ensure that it is accessible to all, that no one has to think twice before taking a subscription for the same, no one has to borrow money or ask for someone’s permission before watching a movie” – Sankshay Babber (Founder, Moon – The Indie Cinema)

Apart from that Moon has a lot of more features, it has a mood playlist where users can watch movies according to their mood at the time of using the app, for example if you’re feeling low you can click on the sad playlist, if you’re with your

loved ones and want to stream something with them open the lover playlist if you want goosebumps or need a kick to your adrenaline rush there’s a playlist for that too.

Moon is also one of the first Indian platforms promoting the cult classic cinema, that is the movies of ‘70s and ‘80s for Free, Users can watch these movies without even buying a subscription, they even have Charlie Chaplin movies.

“I have always been this history buff, you know if someone shows me a torch i want to know when and how and what led to the creation of the first bulb and that curiosity is what drove me towards the cult classic cinema. For me the Vintage Cinema is like a legend, it’s like the Viking which actually gave birth to the cinema as we know it now. Whether we’re talking about how Hithcock came with the weird Camera effects or how we saw the first dutch angle, Vintage Cinema shows the beauty and the rawness of film and filmmaking“

Moon has a very unique sense of marketing, unlike other OTTs who put fancy teasers and trailers on their Social Media, Moon has a totally different approach where you’ll see a total Guerilla approach. 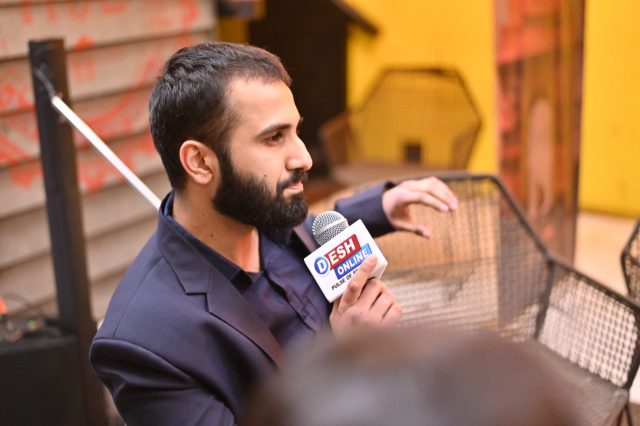 “Moon is a superhero, it’s like that one friend who is there to solve all your problems and that is what our campaigns focus on, #shortfilmsforshortbreaks – the biggest problem we face is boredom, for example while you’re going in the metro alone or sitting in your office with no work you don’t know what to do, the break you get is for a couple of minutes only but we don’t want you to be bored for even 2 minutes so that’s what we do, we serve you a steaming hot delicious short film for your short breaks” – Sankshay Babber (Founder, Moon – The Indie Cinema)

Moon has been working like a revolution in the country, a revolution for all the filmmakers out there whether it’s through their mask moment, printed cups, flash mobs or God knows what else they’re having on the plate.

“ There was one more major purpose of Moon, to be a bridge for the filmmakers, writers, actors, makeup artists, cinematographers in the country who do not have a platform to showcase their talent, a platform free of the hassles of distributors, evils of the industry and budget and so on. That’s why we call it Moon – the Indie Cinema”

So what are you waiting for? Stream… Sorry Gaze the Moon Now!

One thought on “Moon – The Indie Cinema – An Indian OTT Platform”