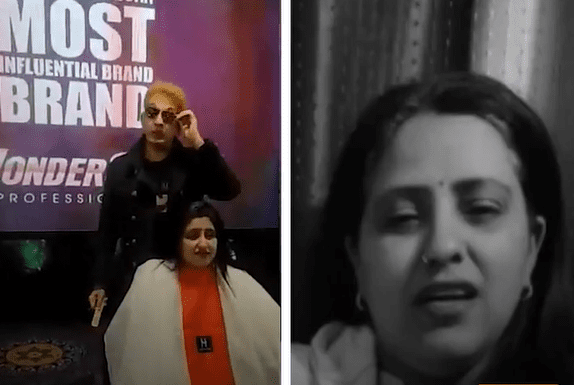 Lifestyle Desk, Delhi Magazine: Famous hairdresser Javed Habib has suddenly come into the limelight due to one of his lousy actions. During a show in Muzaffarnagar on 3rd January, he spat on the woman’s hair and told her merits. On Thursday, a video of Javed spitting on his hair has also surfaced. Jawed Habib explained the importance of hair maintenance and shampoo and said that there is life in this spit. The woman is a resident of Baraut in Baghpat. The police has started the investigation of the matter. A case is made against them for disrespecting the modesty of women. He could also be sentenced to three years in prison.

People burnt an effigy of Javed Habib, a hair expert who spit in the woman’s head.

Most of the attendees of this seminar were people who run beauty parlors. Just say that there were more women. One of them was called by Javed Habib on stage to show the demo and started cutting her hair. Habib spat on the woman’s head while cutting her hair.

When Javed Habib was doing this act with the woman, at that time the woman herself was feeling uncomfortable. The woman had also protested on the stage, but she was not heard at that time. When the video went viral, a woman named Pooja Gupta came forward and exposed Javed Habib.

On Thursday late evening, on the complaint of the victim Pooja Gupta, the police station Mansoorpur has started investigation by registering a case against Javed Habib under several sections. Inspector-in-Charge Sushil Kumar Saini said that a case has been registered against Javed Habib under three Epidemic Act and 56 Disaster Management including the charge of insulting the woman (Section-355), intentional insult with intent to disturb the peace (Section-504). has been done.
Actually this lady Pooja Gupta is a resident of Baraut of Baghpat. Pooja Gupta Vanshika, who lives in Madhuban Colony located in Baraut city in Baghpat, runs a beauty parlor. Pooja was invited to attend a seminar in Muzaffarnagar city on January 3.

Woman Pooja Gupta told that three days ago Javed Habib gave a demonstration in a workshop at Hotel King Villa on the highway. At the same time, he spit, telling the hair to be dry. Habib has publicly insulted me by spitting on my hair. He said, ‘I did not cut my hair again in the workshop. It is better that I get my hair cut from the barber of my street.