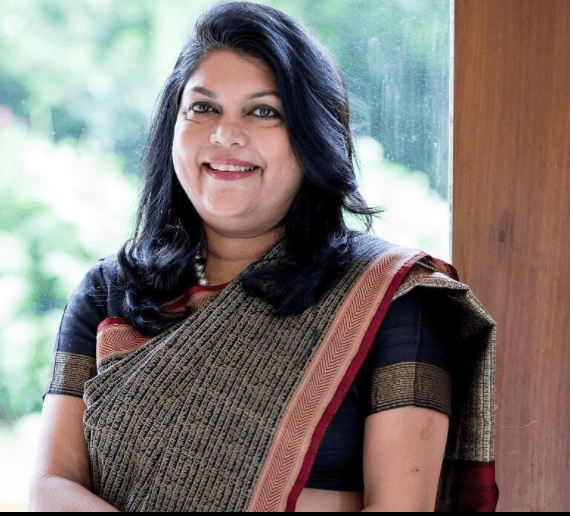 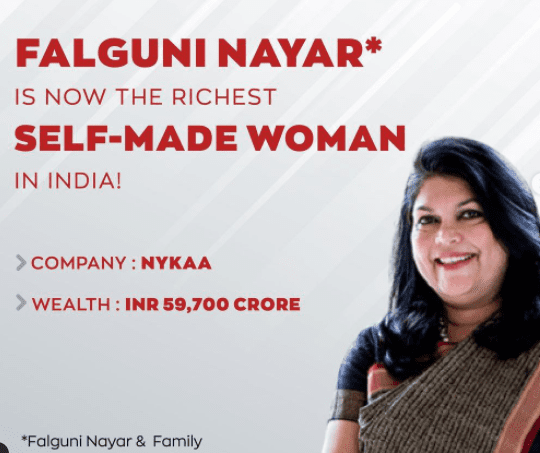 According to the Bloomberg Billionaires Index, Nair is the second richest woman after OP Jindal Group chairperson Savitri Jindal. But Savitri Jindal has inherited the property from her family. Whereas Falguni Nair has made all this on his own.

JUST IN: India mints its newest billionaire as beauty mogul Falguni Nayar’s startup Nykaa soars as much as 89% in its trading debut https://t.co/tLfT670B2k

Falguni Nair was born in a Gujarati family in Mumbai, Maharashtra on 19 February 1963. She was raised in a business environment. Her father ran a small bearing company where her mother helped them. She did her school from a local school in her neighbourhood. She had graduated in commerce from Sydenham College of Commerce & Economics, Mumbai. She has done his post-graduation from IIM, Ahmedabad. She met Sanjay Nair (her husband) at IIM Ahmedabad and became very close to him since then.  They tied the knot in May 1987. Currently, Sanjay Nayar is working as Chief Executive Officer in India of US-based equity firm KKR. They have a son and a daughter named Anchit and Advaita.  Her son Anchit  Nayar has graduated from Columbia University and he is the ceo of Nykaa.com. Her daughter Advaita is graduate from Yale and an MBA from Harvard Business School and currently she is the ceo of NykaaFaishon. Advaita was a part of the founding team of Nykaa and oversaw product, tech, marketing and operations at various points over the initial two years.

Her beauty product range was taken over by women, due to which her company sold $ 200 million worth of goods in just one quarter. Since then, the startup has grown into a beauty retailer. Glamourous Bollywood actors and celebrities and over 70 mortar stores promoted Nykaa through videos, leading to a spurt in online sales. The brand name Nykaa is derived from the Sanskrit word, which means heroine. The Nykaa brand sells a wide range of beauty products including exfoliation creams, bridal makeup and lipsticks, foundations and hundreds of shades of nail colors to suit Indian skin.

Nair holds stake in his company through two family trusts and seven other entities. They have a daughter and son who run separate Nykaa units and are the promoters of Nykaa’s brand. While Nair has become India’s richest self-made woman billionaire.

As Nykaa’s popularity grew, so did its brand appeal. Top Bollywood celebrities like Katrina Kaif have also contributed in taking this forward. Nykaa has also built its own brand of products in-house since 2015 and recently started selling clothing and home products. Its street presence is growing with 80 stores across 40 Indian cities.

Falguni is not only the shareholder and founder of the company, but she also manages the company through 7 other promoters. Falguni’s son and daughter are the promoters of different units of Nayaka.

With this, Falguni Nair has become the richest woman in India to become a billionaire on her own. Falguni Nair is the MD and CEO of Nykaa. Falguni Nair and her husband hold 54 per cent stake in the company.

You would also like to read about real money earning mobile games.