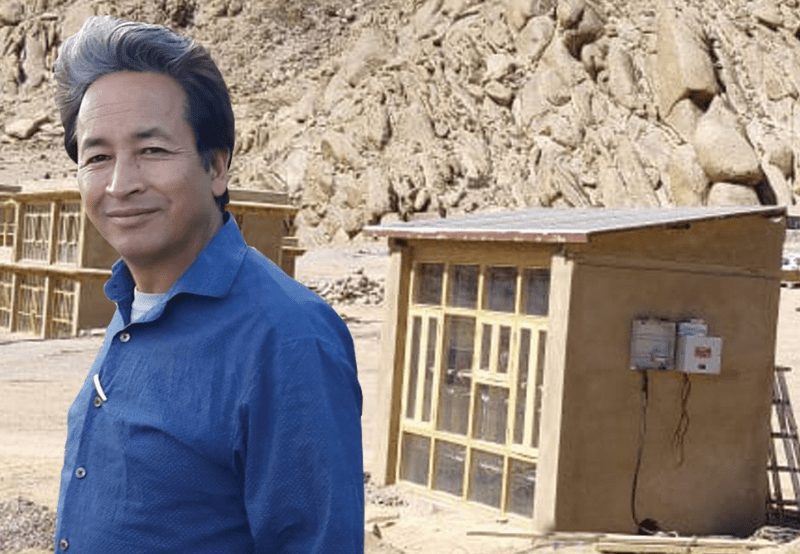 India-China forces are once again face-to-face on LAC in Ladakh. Sonam Wangchuk, the real ‘hero’ and educationist of the 3 idiots, has sought the support of people from all over the country to teach China a lesson. He said in one of his video messages that as citizens of India, we must adopt Swadeshi and break the Chinese Back. The simplest way to do this is by boycotting the ‘Made in China’ goods and starting a campaign to destroy its economic condition as we are directly providing funds to the Chinese Army who are at present attacking at the Indian borders. He said that China will answer the army with bullet but reply with the country’s civil wallet.

The 2009 film 3 Idiots, starring Aamir Khan is inspired by Sonam Wangchuk’s real life. Aamir Khan who portrayed Wangchunk in the film which was a blockbuster.

Sonam Wangchuk said, ‘We are currently dependent on China for many things like manufacturing, hardware, pharmaceutical raw materials, medical instruments, sandal-shoes. Because, most of these goods are produced in very less quantity in our country. Even if it happens, it is a bit expensive. Right now we depend on China for manufacturing, hardware, medicines raw materials. But, the people of the country have to understand that the goods purchased from China will go in the pocket of the Chinese government, by which they will buy guns and use them against us. If we also buy some expensive goods of our country, it will be useful for our labourers and farmers, thus, the Chinese government is not allowed to use our country’s money against us.

Boycott will have to be done systematically: Wangchuk

Wangchuk said, ‘We cannot Boycott of Chinese goods immediately. It has to be done in a planned way. Remove the boycott of hardware items for one year, meanwhile companies in our country find ways to source from other countries. Companies that depend on raw materials start sourcing in other ways.

Chinese software should be Boycotted in a week and Chinese hardware in a year. We should be so determined that we will not take any goods made in China. Think of it like this – people of Jainism do not eat things like meat, onions. They are committed that whatever they go, they will not consume it.

As a result, this tradition also had an impact on the market. Such restaurants, restaurants started serving Jain food. New market related to their habit and tradition arose. Just as Jain food is prepared for the Jains, a non-Chinese market has to be created to end their dependence on China.

The campaign will be successful only when the campaign starts from the public: Wangchuk

Wangchuk said, “This will bring options from other countries by themselves. They will see that there is a huge vacuum in the country due to the Boycott of Chinese goods, which they would like to take advantage of themselves. Companies from other countries, such as Bangladeshi, Vietnam, will come and they will get a chance at a vacant space of the products made in China from the Boycott.

This campaign will be successful only when it starts on behalf of the people, we should not leave everything on the government. The central government has started this. In the case of Boycott of Chinese goods, the shortfall is not of the government but of the citizens. We buy Made in China goods for our convenience.

If people’s thinking changes, the government will have to change its policies automatically. If the government takes a strict step like banning Chinese goods on its behalf, then our people will accuse the government of being a dictator. Therefore, the campaign should start from the people. ‘